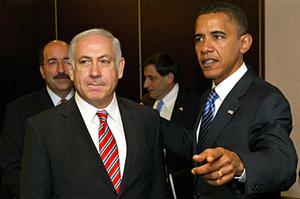 Joe Klein has written one of the best 100 day nutshell reviews of the Obama administration’s performance I have read.
Klein’s take squares almost perfectly with a piece I have coming out in the next few days in World Politics Review — not there yet though.
One of the portfolio downside risks that Obama currently owns is an undefined agenda in the Middle East, and Klein frames this around a sharp jab from former National Security Adviser Zbigniew Brzezinski:

The second big foreign policy challenge is the natural conflict between the demure slog of diplomacy and the need for the American President to be a strong leader who sets the international agenda.
“The one thing Obama hasn’t done in the first 100 days,” says Zbigniew Brzezinski, who was Jimmy Carter’s National Security Adviser, “is the big Middle East speech where he says, ‘This is the settlement. This is what we’re for.’ If he doesn’t do that soon, [Israeli Prime Minister Benjamin] Netanyahu is going to set the agenda, not us – and that will be a disaster. If we don’t act now, any chance of a two-state solution will be gone. If he does act now, every government in the world will stand with him.” Except, perhaps, the Israelis and their American supporters in the Jewish and Evangelical communities. Obama’s willingness to override domestic politics for the greater good will be a major test.
In a way, Brzezinski’s stark choice is emblematic of the problem that Obama faces now that his first 100 days is nearly complete. There are those who mistake his quiet, deliberative style for softness.
There is the fear that he won’t have the strength to stand up to the Israelis (or the Iranians) or to the left wing of his party on health care or to the porkers on the defense budget. On the other hand, there are three dead Somali pirates who attest to this President’s ability to make tough decisions in a timely fashion.
Obama won’t stand up to everyone, always; he is, after all, a politician. But the quality of fights he does choose will determine whether he builds his legacy on rock or sand. He has had a brilliant time announcing his intentions, but the real game of governing is about to begin.

I agree with Klein and Brzezinski — and think that there are defining challenges that the President must confront in order to restore global confidence in the ability of the United States to achieve the outcomes it has set for itself.
Many of these challenges are in the Middle East today — and a new equilibrium and new opportunities are not possible in the region — without some very tough love sessions with Israel’s leadership.
— Steve Clemons

57 comments on “Will Obama’s Foreign Policy Legacy Be Built on Rock or Sand?”