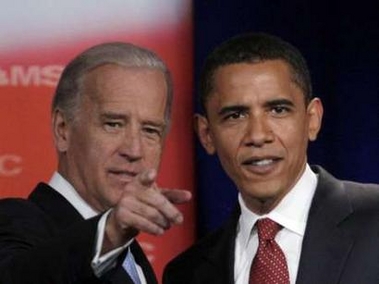 It’s a good thing when a President and Vice President have constructive, creative tension in their relationship and don’t see eye to eye on everything. Joe Biden has seen his role in the Obama administration as “adviser-in-chief” and for the most part has kept his differences with Obama off the record and away from public view.
One split with Obama, however, has been the President’s stand on Iran. Sources report to me that recently the Vice President made comments that Obama needed to speak in support of the Iranians in the streets demanding that their votes count. Biden has not wanted to inject the United States into the fray — but he has wanted the White House to express admiration and support for the risks Iranian citizens are taking to secure democracy.
Recently, Biden said of Obama that the President always evolves in the right direction — and that he would get to “the right place” on Iran.
Geostrategically, I agree with those who argue that no matter who ends up running the helm of Iran’s political system, the United States will have to engage that leadership and negotiate over highly important strategic threats and realities that will be there no matter who ultimately prevails in Iran’s current Civil War.
That said, I don’t think that any President of the United States should disrespect the bravery of what is happening not just in Tehran now but throughout Iran. The election is not over — and it should not be preempted by comments from the White House.
The President has just issued a statement now that makes clear the concern of President Obama for those trying to secure their rights and political voice.
It’s a perfect statement and shows clearly Joe Biden’s influence:

Statement from the President on Iran
The Iranian government must understand that the world is watching. We mourn each and every innocent life that is lost. We call on the Iranian government to stop all violent and unjust actions against its own people. The universal rights to assembly and free speech must be respected, and the United States stands with all who seek to exercise those rights.
As I said in Cairo, suppressing ideas never succeeds in making them go away. The Iranian people will ultimately judge the actions of their own government. If the Iranian government seeks the respect of the international community, it must respect the dignity of its own people and govern through consent, not coercion.
Martin Luther King once said – “The arc of the moral universe is long, but it bends toward justice.” I believe that. The international community believes that. And right now, we are bearing witness to the Iranian peoples’ belief in that truth, and we will continue to bear witness.

This revolution, if that is what it is in Iran, is not about us, not about Americans, or Brits, or any others. It is about the Iranian citizens who have had enough with their own government.
I don’t know who will win in the end — but those who are being brutalized in the street and risking everything to challenge Ahmadinejad and his thugs deserve our respect and our nuanced support.
— Steve Clemons

Drama in Iran Permeates All Discussions in DC
Saturday in Tehran