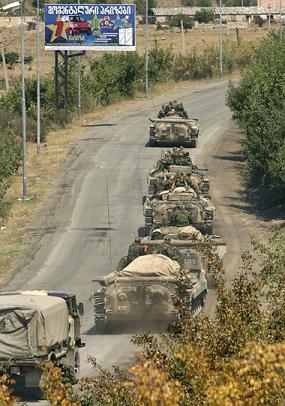 A couple days ago an prominent though irate Kenyan journalist wrote a piece a the Washington Post bemoaning the Russian response to Georgian maneuvers in South Ossetia and suggested that Russia’s “international standing [was] in tatters.” His lament seemed valid in one sense, but laden with misplaced faith in a lofty, unified consensus of what “international standing” meant — symptomatic, I’d posit, of the one sweet/flat world theory floating around.
On the contrary, Russia just stomped all over its neighbor and easily reasserted its sphere of influence in the caucuses, and while doing so, threw some huge elbows — to its near abroad former republics, to NATO, and to any up and coming Eurasian great power challengers reconsidering their aversion to cross-border conflicts. Eurasian expert and Lehigh University Professor Rajan Menon best summed up my reaction when he wrote:

Another unpalatable truth is that Russia’s behavior in this instance is the norm, not the exception: Great powers impose their will on weaker neighbors and limit their freedom of action — all the time.
Airy discourses about the commerce-driven dynamics of globalization and new norms of international conduct will not vanquish realpolitik. Just as other powerful states have done, Russia will be persistent in preventing weak neighbors that it considers to be part of its legitimate sphere of influence from forging links with its adversaries; the means used will vary, but not the ends. In today’s Russia, Vladimir Putin personifies this policy, but it reflects deeper realities rooted in balance of power politics.
In this crisis, America and Europe have also behaved as states invariably have: They do not want to spend blood and treasure when the risks are too high and vital interests are not involved. In this instance, no state within NATO wants to pick a fight with Russia right on its doorstep. Nor do they wish to offer Georgia a guarantee of future protection…
Russia’s attack on Georgia also illustrates how little gratitude matters in the politics among nations and how easily it is trumped by the dictates of power.
When Georgia’s president, Mikheil Saakashvili, sent troops to Iraq, and was hailed as a steadfast democratic ally by President George W. Bush, he no doubt expected to win some good will that could be redeemed in an hour of need. Perhaps he believed that the United States would mobilize its allies and admonish Russia if it were to attack Georgia — perhaps even offer tangible assistance…
Utterly unsentimental and thoroughly cynical, Putin understands the arithmetic of power. In attacking a small and weak state located across Russia’s border he did not take any big risks; and he bet that the West wouldn’t either.

Sure, there will be costs for Russia’s behavior — it will certainly cost them in future international cooperation games but given the direction those efforts are going these days (failure of EU ratification, death of Doha, NATO’s soul-searching, standoffs at the UN, and abrogated international treaties that litter the trail of this administration’s tenure) it just might be banking on higher payoffs with the route it has chosen.
— Sameer Lalwani

You Heard it Here
Biden’s Now Not So Secret Charter?

5 comments on “Thanks But No Tanks: Geogia’s Lesson in Realpolitik”