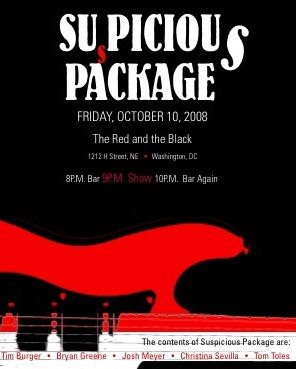 I never learned to play a musical instrument. I have huge, widespread hands and should have been a pianist.
One of my real DC letdowns is not figuring out how to get Condi Rice over to my house to play a baby grand piano I won at a Regal Cinema sweepstakes the night Team America: World Police opened. Don’t ask me about this unless you have seen the movie, including the puppet sex scenes. I do wonder if Kim Jong Il saw it.
Since I’m so musically untalented, I have to vicariously enjoy the musical talents of friends — and for those of you in DC — “Suspicious Package” is the new hot sound.
The seditiously-branded band includes the Pulitzer Prize winning cartoonist TOM TOLES, the U.S. Trade Representative’s hottest bureaucrat CHRISTINA SEVILLA as well as Bloomberg’s TIM BURGER, the Los Angeles Times’ terrorist-watching JOSH MEYER, and Housing and Urban Development (no. . .he’s not the one responsible for the meltdown) BRYAN GREENE.
Suspicious Package, thus far has avoided the more predictable track of YouTubing its performances and launching a fan website — but is instead relying on guerilla blog marketing to let the world know where it might catch a glimpse of “the package”.
Tomorrow night — Friday, 10 October — at “The Red and the Black” at 1212 H Street. Show starts at 9 pm and Tom Toles recommends drinking before and after.
I am having drinks with someone on the FBI’s watch list (seriously. . .) and then din-din with an Ambassador who is suspiciously cool — but hope to catch the tail end songs of the band’s next flight.
— Steve Clemons

Michael Lind on Hegelian Irony and How the Future Might Look
Interviewing Galbraith on the Economy: It’s Not the End of Days

6 comments on “Suspicious Package on Friday”