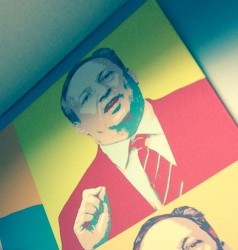 An exchange this Sunday between CNN’s Fareed Zakaria & former US Treasury Secretary Lawrence Summers impressed me and follows in full below.  It’s a quick read but offers some no-nonsense analysis of what is not stirring in the US economy.  While Summers lays out the consensus views that demand remains weak, growth too stifled, and employment levels drag — he argues that the government still has options to improve the situation.

He points out that the Fed has essentially done all that it can to boost employment and grease the system with cheap borrowing — but the real tools lie with Congress and the Executive Branch, either in spending more in the short term or through tax cuts.

Richard Vague and I have argued that even better trigger to higher growth levels would be to focus on incentivizing more ‘private sector debt’ restructuring as private sector debt still hovers at about 160% of GDP and remains a ball and chain around the neck of the economy.  Moving that needle could have far more impact on the economy than either more US government stimulus or anything else the Fed might do.

Summers also shares a cool quip about unconstructive debt ceiling brinksmanship which he compares to squabbles he has with his kids about high spending on their credit cards.  Noting that despite the acrimony at home, Visa still doesn’t get stiffed:

There is no productive purpose to [these debt ceiling fiascos]. You know, I have college-aged children. And occasionally, we have a difference of opinion about how much money they’ve spent. And in our family, we discuss whether they’re going to pay or whether I’m going to pay. But we don’t discuss whether or not Visa should get stiffed…

FAREED ZAKARIA, HOST:  Janet Yellen didn’t have a lot of time to get settled into her new job as Fed chair before being called before Congress.  On Tuesday, just days after her tenure began, she testified before the House Financial Services Committee. Wall Street was all ears and its reaction was mostly positive, after a month of much market tumult. What was the reaction of the man who might have been Fed chair? We will ask him. Larry Summersis the former secretary of the United States Treasury, who withdrew his name from consideration for the top job at the Fed in September.  He joins me now from Cambridge, where he was the president of Harvard University and is now a professor there. Larry, welcome back to the show.

LARRY SUMMERS, FORMER TREASURY SECRETARY:  Good to be with you, Fareed.

ZAKARIA:  Would you have said anything differently from what Janet Yellen said? She promised a great deal of continuity.

SUMMERS:  Oh, look, it’s very hard to judge tactics from the outside.  I think we have a Federal — we’ve had and we continue to have a Federal Reserve that recognizes that inadequate demand, inadequate growth and inadequate employment are the greatest threats to America’s economic health. And so they’ve maintained a policy bias toward expansion.  And I think that’s broadly the appropriate orientation to have. But questions of precise tactics are very, very hard to judge…

SUMMERS:  — from the outside.

ZAKARIA:  — if you look at what the Fed has done, it has kept interest rates very low, done other very extraordinary things, precisely to address the issue of slow growth and high unemployment. And yet, if you look at the unemployment numbers, you still have persistently weak employment.

SUMMERS: I don’t think that’s the right way to look at it. First, wherever you observe doctors working hardest, you’ll observe the most sick people, but that doesn’t prove that doctors are counterproductive or unproductive.  Of course, in the face of unprecedented weakness, we’ve had unprecedentedly easy monetary policy.  But that doesn’t call into question the efficacy of the monetary policy.  Where I would agree with the critics and where I’ve been a very strong critic myself is that I believe we would be doing much better if more of the spur to economic growth was coming from the side of government spending or tax reduction rather than relying on the monetary and liquidity tools, to the extent we have.  But that, of course, is not within the power of the Federal Reserve.

ZAKARIA:  Do you believe that the U.S. is going to grow, is going to surprise on the up side, as they say in market lingo, that is that the growth will be, this year, probably a little stronger than the consensus?

SUMMERS:  I’m not sure.  I think the consensus has come down a bit in the last, uh, in the last few weeks.  I probably would have said that two months ago, Fareed.  But now, I think after two soft employment reports, after a sense that there’s been a big inventory buildup that will get run down and that will come at the expense of GDP, I think that, actually, the statistics right now and the people who base their judgments on the statistics are actually a little more optimistic right now than the business folk I talk to, who have order books, who are still fairly nervous. So I wouldn’t — I’d say around the consensus forecast of about 3 percent the risks are pretty symmetric.

ZAKARIA:  Let me ask you, finally, Larry, watching this debt ceiling fiasco one more time, or the avoidance of a fiasco, do you think we should somehow find a way to abolish the debt ceiling, where I think Denmark and the United States are the only two countries that have it.  And in Denmark, it’s been essentially automatically raised? We’re unique in having this double-barreled system, where, first, you spend the money and then you have to raise the debt ceiling. Should we abolish it

SUMMERS:  Yes.  There is no productive purpose to it.  You know, I have college-aged children.  And occasionally, we have a difference of opinion about how much money they’ve spent.  And in our family, we discuss whether they’re going to pay or whether I’m going to pay.  But we don’t discuss whether or not Visa should get stiffed, because we know that would be terrible for our family’s credit rating and that’s just not what we would do.  And in the same way, we’ve incurred all these liabilities.  We’ve spent this money.  Going through a process of discouraged whether we’re going to pay the debt we already owe is not worthy of a great nation.

ZAKARIA:  Larry Summers, thank you very much. I would love to be a fly on the wall watching a kid explaining to the former Treasury secretary why he didn’t pay his — why he doesn’t want to pay his Visa bill. Up next, What in the…

SUMMERS:  Good to be with you.

One comment on “Summers on Inadequate Demand, Growth & Employment”