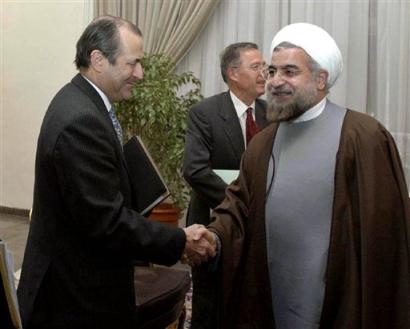 (This picture from November 2004 depicts then UK Ambassador to Iran Sir Richard Dalton and Iran’s then top nuclear negotiator Hasan Howhani)
During my recent trip to London where I spoke at a forum organized by intellectual wunderkind G. John Ikenberry through the triad of the Princeton Project on National Security, Newsweek, and the Royal United Services Institute (RUSI), I was privileged to be on a panel with Newsweek Middle East regional expert Christopher Dickey, RUSI Professorial Fellow Malcolm Chalmers, and Chatham House Middle East expert and former UK Ambassador to Iran Richard Dalton.
Dalton is in Washington TODAY and speaking at the New America Foundation at a session I am chairing. The title of the event is “Iran: What Matters Now?”
If you are local and what to attend, please just sent me an email. The event will take place between 12:30 pm and 1:30 pm EST and will STREAM LIVE here at The Washington Note.
— Steve Clemons