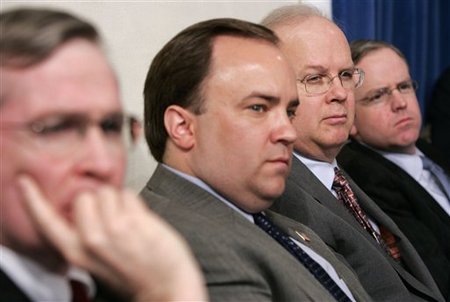 On October 19, 2005, Lawrence Wilkerson — Colin Powell’s aide, friend, and chief of staff respectively for 16 years — cleared his throat and conscience about what he saw as a Cheney-Rumsfeld cabal that was warping and distorting the nation’s national security decision making process. Wilkerson gave an amazing speech that I helped organize for the American Strategy Program of the New America Foundation — and it took serious guts and courage for him to do this.
There are some jeering at Scott McClellan for not resigning earlier and not speaking up sooner (as he has now done in his new book) about what he knew about the misdeeds and deception being promulgated from Oval Office central in the White House.
But history needs those who had a front row seat to what was going on to speak up and put this material out into the public record.
This doesn’t change what has happened and that Scott McClellan was part of the Bush machine — but the fight over this president’s legacy and awareness of the crimes this administration propagated really do matter. The political left really doesn’t need to be convinced, but many on the political right do.
And when Republican folks like Lawrence Wilkerson, Flynt Leverett, Brent Scowcroft, Richard Haass, John Bellinger, and others speak up and help us know the truth and give us new wherewithal to encourage others on the political right to look disdainfully and skeptically at George W. Bush’s eight years in office — this should be applauded.
Scott McClellan says he is answering a higher loyalty now than the President — “a loyalty to the truth.” We need more like him to do the same — just like Wilkerson, Scowcroft, and others like former CIA consultant and staunchly conservative scholar Chalmers Johnson, and former right wing Vietnam war hawk Daniel Ellsberg have done.
And I do applaud. Scott McClellan will be on C-Span’s Washington Journal tomorrow morning (Friday) at 7 am EST.
— Steve Clemons