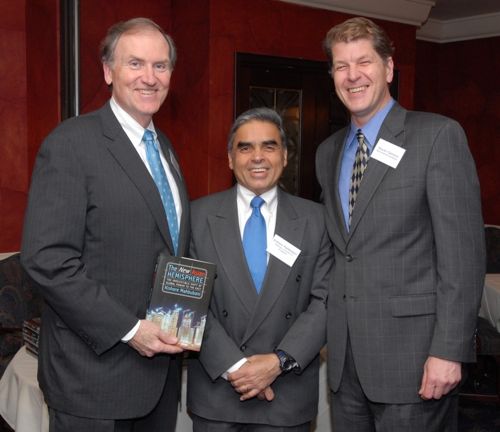 (Kishore Mahbubani speaks at New America Foundation reception on the “Rise of Asia and the Decline of the West. Pictured are Deputy Secretary of the Treasury Robert Kimmitt, Kishore Mahbubani, and New America Foundation/American Strategy Program Director Steve Clemons. photo credit: Samuel Sherraden)
The following is the fourth installment in an evolving series of guest commentaries on an original post on The Washington Note titled “The Next Fault Line in Foreign Policy Combat: “The U.S. Matters” vs. “No, It Really Doesn’t“.
This guest post and response is offered by former State Secretary of Singapore’s Ministry of Foreign Affairs and Singapore Ambassador to the United Nations Kishore Mahbubani. Mahbubani, who now serves as Dean of the Lee Kuan Yew School of Public Policy at the National University of Singapore has authored the new book, The New Asian Hemisphere: The Irresistible Shift of Global Power to the East. Mahbubani also published this Foreign Affairs article, “The Case Against the West” that offers in abbreviated form some of the key points in his book. 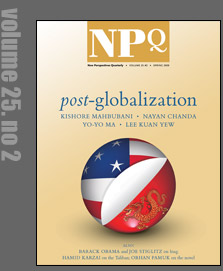 A video clip of Kishore Mahbubani speaking for the New America Foundation/American Strategy Program in Washington, DC can be viewed here. Mahbubani also recently did a Q&A titled, “Peeling Away the Western Veneer” in Spring 2008 New Perspectives Quarterly. The rest of the pieces in a series organized by Nathan Gardels on Post-Globalization are quite thought-provoking.
The posts in this series thus far are:

“The Next Fault Line in Foreign Policy Combat: “The U.S. Matters” vs. “No, It Really Doesn’t”
G. JOHN IKENBERRY RESPONDS: The Rise of Asia AND the West
The Debate on East vs. West Continues: Anne-Marie Slaughter Challenges Mahbubani

23 comments on “Mahbubani Responds: Western Intellectual and Moral Cowardice on Israel/Palestine is “Stunning””