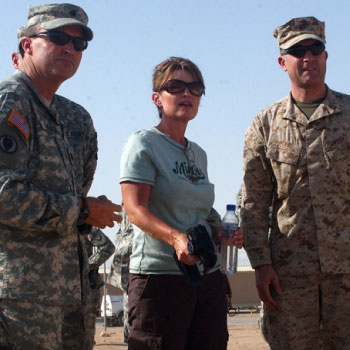 Whether or not she makes it to the White House and Old Executive Office Building on the McCain ticket, Sarah Palin is going to make a ton of $$ on a memoir — particularly with stories like this continuing to bubble to the surface.
Most of the sharp-shooter investigative journalists I know are in Alaska, turning over every rock and piece of tundra.
One of the best, balanced Alaska-based political observers I know is University of Alaska at Fairbanks professor Gerald “Jerry McBeath.” McBeath is a Democrat who worked years ago as an intern in Senator Frank Murkowski’s office and helped Lisa Murkowski in her own race for the Senate. He helped organize the unionization of University of Alaska employees and is also a China hand who studied years ago under the guidance of Chalmers Johnson.
McBeath is also the leading authority on Alaska’s state constitution and knows everyone political in Alaska — and their hidden lives. He hasn’t asked me to post this for him — but I do recommend that serious researchers and writers touch base with McBeath to get a truer feel of the good and not so good on Sarah Palin.
— Steve Clemons