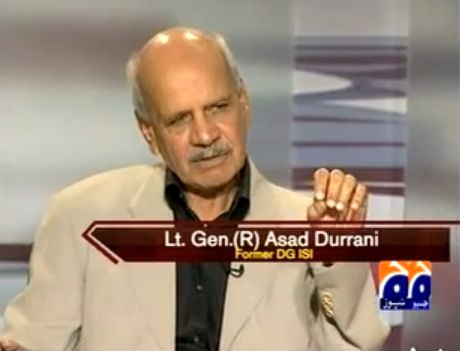 A few years ago, I was invited to an extraordinary set of meetings in Beijing organized by Marika Vicziany of Monash University. The meeting featured participants like then Labor Party leader (and next Australia Ambassador to the U.S.) Kim Beazley and former Ministers of Defense of India and China – and leading policy personalities from the Asia Pacific region. And Generals from Pakistan.
I was the token American in what was a fascinating exercise of China, India and Pakistan former officials floating trial balloons about their respective nations’ security needs and assessments among a ring of people very close to incumbent power.
My flight was late, but when I arrived I rushed in to the conference opening luncheon and sat at the first table I found a seat. I usually say hello to every person at tables I’m seated at and did so this time.
And as I worked around the group, I met a tough-edged but obviously seriously intelligent general from Pakistan, Asad Durrani. I didn’t know much about him then but could tell that my table companions had been discussing Pakistan’s ISI (Inter-Services Intelligence) – so I jumped in with a question:

General Durrani, does President Musharraf really not control the ISI? Or is this a big put-on?

I had hit a nerve of the table as every jaw dropped — except Durrani’s.
He sat there, quite nonplussed by the question which I had just pitched to the person everyone but I knew had actually been the head of ISI in the early 1990s.
Durrani seemed to like my candor, and he candidly responded:

President Musharraf may have much to gain by seeming that he does not control ISI.

I became quite taken with the level-headed candor and smart strategic sense General Durrani displayed over the next two days — and his comments about ISI and Pakistan’s political leadership were deeply imprinted on my thinking about the shell game of trusting Pakistan’s intelligence and national security services.
Now after news that nine armed terrorists linked to al Qaeda and Pakistan’s Taliban infiltrated the command headquarters of Pakistan’s military, it seems to me that whatever certainty of control Pakistan’s political and military leaders had over their ranks is now broken.
The Rawalpindi incident could not have occurred without inside help, and fortunately, one of the ringleaders in the attack, a former soldier named Muhammad Aqeel, was captured.
Pakistan’s responsible national intelligence authorities must now begin to track all of the contacts and intelligence relations of this terrorist operation and purge their ranks of those connected. When Aldrich Ames was hiding behind mole hunts in the CIA, it finally took an investigation by the FBI to finally bring him down.
Painful as internal hunts can be for those who are collaborating with enemies of a state, they must be pursued because confidence can’t be established without purging those who are helping to empower the most virulent wings of the Taliban in Afghanistan and Pakistan as well as al Qaeda and other groups.
This is Pakistan’s fight but it has bearing on all of its allies and partners — but tolerating a Pakistan security structure that is unwilling to exploit every lead to shut down internal spies and allies of those trying to bring down the Pakistani government and secure its nuclear weapons is not an option.
Pakistan should establish a Commission headed by General Asad Durrani with other former ISI director generals to run this search and hunt among their ranks.
The military and national security bureaucracy may protect some of their own in such a purge — but in the end, all of those who are embedded and collaborating with the likes of those who led the military attack at Command Headquarters need to be neutralized.
— Steve Clemons

The View from Your Room: Beach After Baghdad
The Price Tag of Afghanistan Dwarfs Country’s GDP

12 comments on “Pakistan Military and ISI Must Purge Ranks”