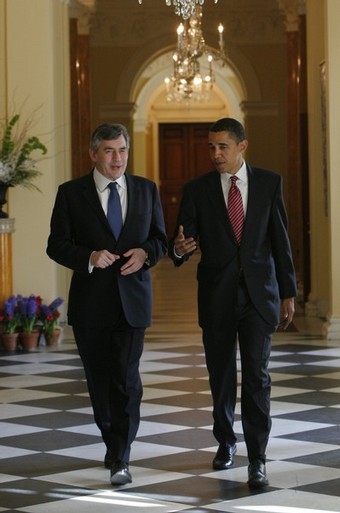 (I would have loved to have been the official blogger with these guys. . .)
When I started The Washington Note, my colleagues (particularly my boss) were not thrilled. They didn’t get what a blog was and didn’t understand how a blog could be an oped a day, could help agitate for a better world, could help sink a UN Ambassador’s confirmation bid in the Senate, or how it was a sounding board for bad and good ideas to share with others eager to zap the blogger with feedback.
Fortunately, their disinterest in blogging gave me the space to build it up and experiment. Now, lots of others are into the game — and the New America Foundation has embraced the medium strongly. Even our relatively new president, Steve Coll who moonlights as a Pulitzer Prize writing book author and staff writer for the New Yorker has a blog situated at the magazine titled “Think Tank.” Some of my other education policy colleagues launched Higher Ed Watch which broke the student loan scandal last year. We also have the American Strategist and even The Havana Note where former State Department Chief of Staff Lawrence Wilkerson is blogging up a storm.
And with a foot inside New America and one in the the private world of nuclear wonks, my friend and colleague Jeffrey Lewis publishes Arms Control Wonk.
But now the British Embassy has launched a new blog. I became one of the first in the blogosphere to pay tribute to its eventual emergence in a funny piece that suggested that John Cleese be its online introducer and occasional big ideas narrator. My understanding is that they tried to secure Cleese — but he’s under water somewhere. It would be soooo good with Cleese.
In any case, the British Embassy is at it — and the staff there are following in the able footsteps of British Foreign Minister David Miliband’s committed (and candid) blogging.
I see that the roster of bloggers includes British Ambassador Nigel Sheinwald — who has been very good at using his dinner convening power to assemble some of the most interesting political observers in Washington. Only problem is that he’s not going to be able to blog most of the cool stuff he hears as its just about always off the record (except for maybe. . .Gordon Brown and David Miliband).
Frequently, people lean over to me and tell me something is off the record as they think I’ll divulge stuff I perhaps shouldn’t. But really — I never do. Really, I don’t. . .
I can’t wait until people begin telling Ambassador Sheinwald, “Please Nigel. . .off the record, OK?”
Just the other evening, the Ambassador was kind enough to invite me to join Joe Trippi, Stuart Rothenberg and Michael Barone in a discussion with one of the UK’s foreign secretaries. I can say it happened — but won’t convey the fascinating discussion we all had that night. I wish we had recorded it.
But I do very much hope that the Ambassador finds his blogging voice and posts something soon.
And the only other recommendation I have for my new British blogging colleagues is that they replace those rather stiff yearbook photo mug shots with ones showing them with their respective pets, or perhaps playing their favorite sport. . .
At least something more Cleese-friendly.
— Steve Clemons

TWN on the Road: Off to Chicago
Christopher Buckley Shown the Door at National Review