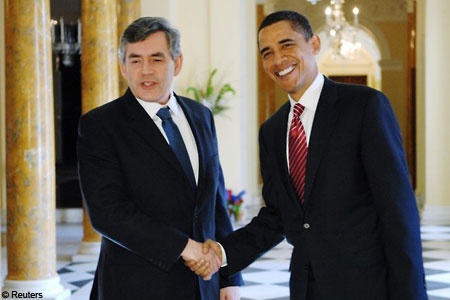 (Obama Does Brown but Not Brussels)
I’m strongly supportive of Barack Obama’s announced plans to spend some quality plane time with Senators Chuck Hagel (R-NE) and Jack Reed (D-RI) on a trip to Iraq. They need to help do for Obama what Samantha Power and others have done over the last couple of years on national security issues: tutor him.
But while I think that Obama’s raft of advisers — including folks like Susan Rice, Anthony Lake, Gayle Smith and more — who are experts on global justice questions, failed state dilemmas in the developing world, and a whole palette of tough, avant-garde 21st century challenges like transnational disease and climate change, Obama also needs some lessons on getting the classic, big state questions right.
That’s what European leaders will be trying to discern. Does he have deep insights into the evolving tectonic realities of great state competition, and does he have a plan? or not?
I’m worried. While some have become distracted by a silly discussion inside Germany on whether Obama should speak at the Brandenburg Gate in Berlin and whether he should defer to Angela Merkel, most seem to have forgotten that Obama’s celebrated European trip does not include Brussels.
He’s hitting France, Germany, the UK — and all of that is good.
But Brussels is the capital of Europe. It is the promise of what Europe is struggling to become that makes Brussels a vital stopover point. Obama is visiting some of the key, strategic nodes that give Europe some of its legs — but the trip looks like an “Old Europe” trip, not a new one.
Perhaps to teach us a lesson, we should have more world leaders visit San Francisco, Houston, Boston, New York, Chicago — and just skip Washington, D.C. It’s not a bad idea come to think of it.
But seriously, for Obama to neglect Brussels and the vital significance of what is going on in the evolving institutional heart of Europe may amplify doubt about him and his strategic template. Long ago, I broke the story that Senator Obama had not chaired any policy hearings of the European Subcommittee of the Senate Foreign Relations Committee. I thought that this got overplayed by some others — but still, it raised questions about the status of Europe in Obama’s world view.
This trip was and remains an opportunity to show that he has studied up and that he gets the fact that when it comes to Iran, Russia, China, the global economy, oil and energy strategies, and more — working with Europe behind the scenes and overtly is not optional.
I met with some of Obama’s Europe advisers recently and congratulated them for getting the Europe box checked off during the campaign. They told me that they worked hard to lobby for the trip — and to get him to underscore how vital the transatlantic relationship was to nearly ever classical and newfangled national security challenge the US and Europe were facing.
But while I still applaud his forthcoming journey, I need to underscore that the Europe box is not in fact checked off until he gets to Brussels. We’ll consider it half checked off — sort of like a spare in bowling perhaps.
Bur for now and for much of the rest of Barack Obama’s life — particularly if he wins the presidency — everything he does will have symbolic significance.
And what he is saying to Europeans, symbolically, is that their capital does not quite rank. Too bad in my book. I hope it’s something he can find ways to “symbolically correct.”
— Steve Clemons

<em>Guest Post by Katherine Tiedemann</em>: Could A Truth Commission Pull Us Back from “The Dark Side?”
When “New Realities” Ignore Facts on the Ground

59 comments on “Obama’s Europe Blindspot: Why Did He Skip Europe’s Institutional Heart?”