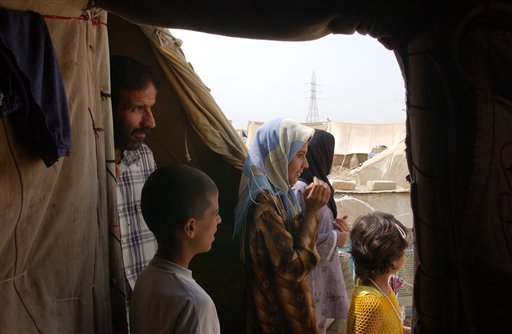 It comes as little surprise that Fred Kagan, Kimberly Kagan, and Jack Keane offer a glowing assessment of the political and security progress in Iraq in yesterday’s Wall Street Journal op-ed “The New Reality in Iraq.” Despite evidence to the contrary, the Keanes and Kagan open by triumphantly proclaiming:

All of the most important objectives of the surge have been accomplished in Iraq. The sectarian civil war is ended; al Qaeda in Iraq (AQI) has been dealt a devastating blow; and the Sadrist militia and other Iranian-backed militant groups have been disrupted. Meanwhile, the Iraqi government has accomplished almost all of the legislative benchmarks set by the U.S. Congress and the Bush administration.

This “New Reality” they inhabit must be in a parallel universe because substantial accounts suggest exactly the opposite — Sadr is consolidating power and the political scene in Iraq is moving towards him; gaping holes devalue claims of political progress, especially with respect to oil laws, professional police forces, and reintegration of Sunnis into security forces; al Qaeda just scored a big hit in Diyala; and US softening towards Iran is in part a recognition of what Steve Clemons describes as “Iran’s ability to control the temperature of Iraq.”
While these might be points of contention some can wrestle with, the authors remain muted on a major threat to the political stability, security, and purported sectarian calm of Iraq and the surrounding region — namely the state of Iraq’s refugees — and their silence is deafening.

The International Crisis Group (ICG) has again drawn attention to this elephant in the room that the United States has only scraped at the edges by providing some visas to Iraqis who assist the US as contractors or translators.
Even if one bought the Kagans’ and Keane’s argument that sectarian violence is down, it is a misleading and temporary figure because over five million — one in five Iraqi’s — have fled their homes (not to mention the over half a million Iraqi deaths). 2.5 million Iraqis are internally displaced and without ample support, the process of resettlement or return to their homes will be a deeply destabilizing and violent process that is bound to reignite sectarian tensions.
Meanwhile, the other 2.5 million are being hosted in states that are becoming increasingly concerned and overwhelmed with the burdens of millions of refugees that drive up inflation, housing prices, the black economy, crime, and the propensity and cover for extremist elements.
Refugee camps, particularly in the Middle East, have long been simmering hotbeds of tension and violence with countless examples from history — ranging from Jordan in 1970 to Lebanon today — that provide a cautionary tale given our current willful negligence.
So even if the Kagans and Keane ignore the old realities of Iraq that are ever present today, they cannot wish away the looming strategic consequences as the refugee crisis spirals into a catastrophe.
The strategic blunder aside, the ICG reports on the fecklessness of the US and Iraqi governments:

If Jordan, Syria and Lebanon can be faulted for unfriendly treatment of refugees at border crossings and lukewarm assistance once they have entered, they should, nonetheless, be credited for having agreed to receive so many Iraqis in the first place and allowing them to stay at great cost to their own societies. By contrast, it is difficult to give the Iraqi government any credit at all. Flush with oil money, it has been conspicuously ungenerous toward its citizens stranded abroad. No doubt there are senior former regime figures among the refugees, but this does not excuse callous neglect of overwhelmingly non-political people who loyally served Iraq rather than any particular regime.
The approach of the international community, especially states that have participated in Iraq’s occupation, has been equally troubling. Western nations have been happy to let host countries cope with the refugee challenge, less than generous in their financial support, and outright resistant to the notion of resettlement in their midst. Although it has contributed more than most, the U.S., whose policies unleashed the chaos that spawned the outflow, has clearly failed in its own responsibilities: downplaying the issue, providing far less assistance to host countries than needed and admitting to its own shores merely a trickle of refugees and only after unprecedented security checks to which asylum seekers from other nations are not subjected.

A corrective course would require not only opening up immigration paths to Iraqi refugees but also providing significant economic support funds to regional actors assuming the burdens and responsibilities of resettling them.
Based on Jordanian estimates of annual spending on refugees, serious efforts to deal with the crisis would cost roughly $6.5 billion per year or about five percent of annual US spending on Iraq. The returns for the US strategic position (staving off further regional instability) and moral position (boosting US credibility and compellence power in international affairs) would be far higher.
— Sameer Lalwani

Obama’s Europe Blindspot: Why Did He Skip Europe’s Institutional Heart?
Add a Little John Cleese to the British Embassy Blog

15 comments on “When “New Realities” Ignore Facts on the Ground”