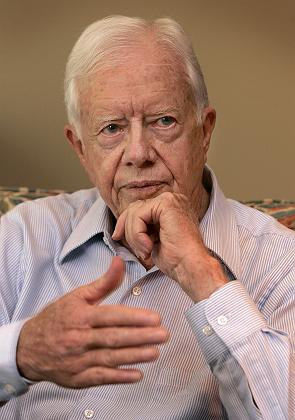 Ben Smith of Politico points out that Barack Obama has “drawn a line” regarding which of the world’s problematic bad guys should be met by Presidents like himself — and Jimmy Carter. He thinks Carter should not meet any Hamas leaders.
I guess isolation works for some and not others — but ah, just when does one know in Obama’s play book?
Apparently, he’s OK meeting Israeli leaders because they disavow terrorism — but still they protect and establish illegal settlements and have installed more roadblocks and inhibitions to Palestinian mobility than was the case since the November 2007 Annapolis Summit. And while knocking Carter’s efforts, Obama fails to articulate how any negotiation that does not include in some way a wrestling match and attempt at a negotiation with Hamas will be stable enough to believe in.
A leading Knesset Member in Israel who strongly favors Senator Obama if he had the chance to vote in the U.S. elections told me recently that his one fear about Obama is that in his quest for the White House, he will ultimately have to shed his pragmatic approach to problem solving and demonstrate to critics “that he will be more Israeli than the Israelis.”
To establish a context, look at this roster of great Americans — all national foreign policy leaders, military leaders, former government officials, and public intellectuals — who have been able to go where Barack Obama seems unable.

They all signed a letter at the time of the Annapolis Summit to President Bush and Secretary of State Rice that said that:

As to Hamas, we believe that a genuine dialogue with the organization is far preferable to its isolation; it could be conducted, for example, by the UN and Quartet Middle East envoys. Promoting a cease-fire between Israel and Gaza would be a good starting point.

While he didn’t sign our letter, Colin Powell has also said that Hamas should not be isolated and must be engaged.
The roster of American leaders who led the letter are:
BRENT SCOWCROFT, ZBIGNIEW BRZEZINSKI, THOMAS PICKERING, CARLA HILLS, LEE HAMILTON, THEODORE SORENSEN, ERIC SHINSEKI, NANCY KASSEBAUM BAKER, and PAUL VOLCKER.
Others that are included on the roster of signatories are:

Former President Jimmy Carter is right to try and do what can be done to kick the tires of an alternative, internal solution to the political division of Palestine. His work may fail — but the effort is worth exploring.
The correct position for Obama to have taken is to say that he would be open to what someone like a Jimmy Carter. . .or a Colin Powell. . .or a Tony Blair, Joschka Fischer, Javier Solana, Vladimir Putin, Hu Jintao, or Saudi King Abdullah might be able to achieve by way of Hamas and Fatah. Emissaries are important, and they can create opportunities a President can’t often take the risks to do himself or herself.
Obama, in my view, has tarnished his foreign policy credentials here. If he can’t embrace what these Americans have been able to do — and what Senator Chuck Hagel has suggested be done with Hamas — then what use is his new vision?
What is his position today if not one that has been influenced by special interests whose political weight has undermined the strategic interests of the United States?
— Steve Clemons

After Bucharest: Energy Security and Russia
Fading From Relevance