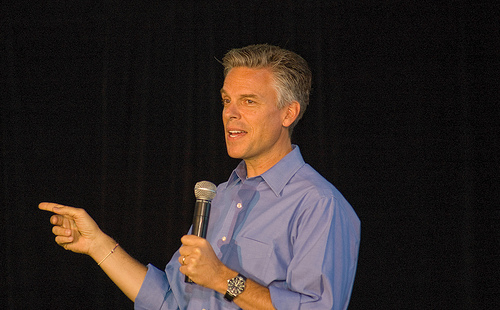 Recently at a Congressional Quarterly breakfast, Political Wire blogger Taegan Goddard said that Barack Obama excels at keeping his political opposition wobbly and off balance.
Goddard is right – and Barack Obama has just pulled off another blow to the Republican party’s steadiness.
Obama has just chosen Jon Huntsman Jr. — heir to the powerful Huntsman chemical conglomerate, former Deputy US Trade Representative and Ambassador to Singapore, and incumbent Governor of Utah — to serve as US Ambassador to China.
Years ago, former Senate Majority Leader and then US Ambassador to Japan Mike Mansfield said that “the US-Japan relationship is America’s most important bilateral relationship – bar none.”
That is no longer true.
America’s relationship with China is the single most important bilateral relationship it has in its foreign policy and economic portfolios — and Barack Obama just selected as his lead point person a rising star in Republican circles who co-chaired John McCain’s presidential campaign.
I have had the privilege of knowing Jon Huntsman since 1994 and have always been impressed with his pragmatism and rejection of ideological fundamentalism.
Huntsman is a great choice for this key post. He’s smart on Asia, understands business, and has a real understanding of the complexities of China’s ascension on the global power ladder.
One of the potential personal downsides for Jon Huntsman is that I had always hoped that he might one day run for the presidency as a balanced, sensible Republican pragmatist. I think that his appointment as an Obama ambassador probably undermines that possibility.
Congrats to Jon — and this simply is just a really terrific choice for which Barack Obama deserves applause.
— Steve Clemons