Here is a brilliant take by James Pinkerton in a special Politico online forum on the failings of the Obama administration so far when it comes to turning this economy around: 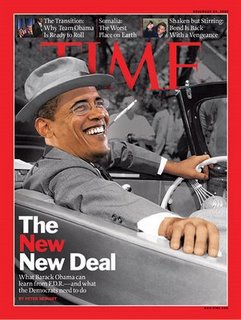 Obviously the “stimulus” was a a dud–and the rate that things are going, the next “stimulus,” too, will be a dud. Deficit spending is valuable only if you get something more valuable in return for that spending. Otherwise, stimulus spending is just a ticket on the Argentina Express.
During the New Deal, we deficit-spent and in return, we got bridges, roads, dams, and entire power systems. And unemployment fell. Today, we are getting the promise of such systems, but not the results – the money is not being spent on tangible things, nothing is being built. Why? Because the process simply is not designed to go fast, because the environmental-impact-statement-writers and NIMBYs block everything — and the cap-and-traders stand ready to kill off the rest of the energy economy.
So of course unemployment is rising. There’s no stimulus, except for Yale
Law grads, and, of course, Goldman Sachs.
If President Obama wanted the nationwide economy to recover, he would have had to rethink America’s basic approach to infrastructure and energy, with an eye toward more, not less, sooner, not later. That was the legislation he should have sought back in January; instead, he made the narrow pipeline connecting inputs and outputs even narrower.
That’s a formula for slow-motion disaster, as we are seeing every day now.

Thus far, Obama has shown that he is more about reflating the economy than restructuring it — and unless he changes course in what will probably be a next stimulus package, Obama can not presume to Rooseveltian status — nor does he rank high in terms of Hamiltonian national economic thinking either.
While Hamilton laid the groundwork for national banking and credit, he always understood that the real economy and manufacturing strength were the core objectives behind his concept of national power. Obama is not there yet.
— Steve Clemons