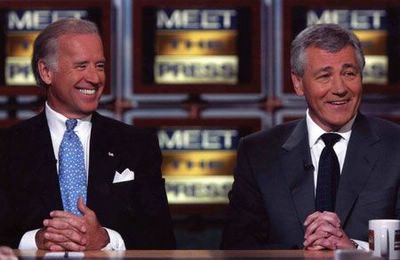 Joe Biden‘s selection as Vice President doubles the chances that Senator Chuck Hagel will be selected as Barack Obama’s Secretary of State, which this writer considers positively.
Joe Biden was a key partner with many NGOs and this blog in stopping John Bolton’s confirmation as US Ambassador to the United Nations.
When President Bush essentially threw the Baker-Hamilton Iraq Study Group into the trash, Joe Biden embraced it and held numerous Senate Foreign Relations Committee hearings to make sure that the core elements of the Study Group report were positioned well for public attention.
Biden voted against the Kyl-Lieberman IRGC amendment that would have provided another “Iraq War Resolution-like” loophole for Iran.
After President Bush’s provocative State of the Union and post-Iraq Study Group “Statement to the Nation” speeches in 2007, in which both the Wall Street Journal and I thought Bush was telegraphing that he had given permission for covert actions against Iran, the next morning, Biden pounded on Condoleezza Rice and said “the President has no authorization to invade or conduct covert operations against Iran.”
Good stuff — and it belongs in the Biden brief.
— Steve Clemons

94 comments on “More Good Stuff for the “Biden Brief””