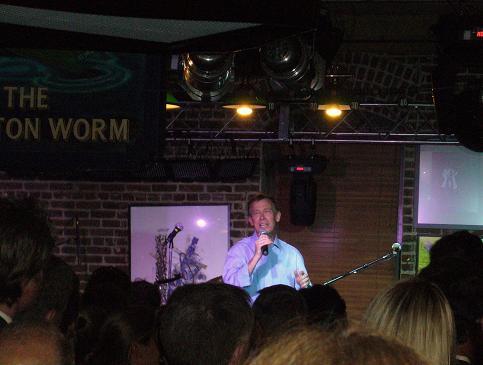 Denver Mayor John Hickenlooper hosts a reception at his brewery in downtown Denver Monday night after the first day of the Democratic Convention.
Denver Mayor John Hickenlooper is a fitting host for the Democratic National Convention not only because of position but because of his identity as an independent, outsider/long-shot candidate who began with a message of “Change” and won a surprising victory when he ran for the office 2003.
As a political neophyte with a limited budget, Hickenlooper needed an ad campaign that would break the traditional mold of forgettable, mainstream political ads with John Williams-like music that crescendoes against the steady stream of American flags and glib, warrantless claims boosting or attacking a candidate’s record.
Hickenlooper hired Bill Hillsman — a media consultant who had run successful ad campaigns for Sen. Paul Wellstone, Gov. Jesse Ventura, and Green Party Presidential Candidate Ralph Nader (successful at least in impacting the outcome of the election). They ended producing a well-timed and humerous ad titled “Change.”

Like the famous ads of the 2000 Presidential election camaign “Priceless” and “When I Grow Up“, Hillman’s ads were modeled on commercial advertising and very entertaining while still selling the candidate’s core message. As a result, these ads memorability and free media generated an echo most other political ads rarely receive, allowing shoestring capaigns to punch above their weight and successfully compete against better financed campaigns with bigger ad buys.
Hillsman has been a relative outsider in the political advertising world, in part by his choosing and selectivity in working for candidates and in part because he’s been dismissed or sidelined by the East Coast politial/campaign elite. But the ideas he pioneered seem to have infiltrated the Obama campaign as it took viral media to the next level in the primary season — in part enabled by the demographics of their audience, the rise of the netroots community, and the support of celebrities like will.i.am whose inherent commercial appeal led to successful ventures like the “Yes We Can” video.
But my guess is that those ads don’t seem to resonate with mainstream America the same degree as the Wellstone, Ventura, and Hickenlooper ad campaigns, which were credited with winning independents and tipping elections. In what is turning out to be a closer election than many had expected, to win over mountain state households as this convention’s selection of location was ostensibly set up to do, Barrack Obama would be wise to study the folksy mannerisms of Mayor Hickenlooper and bring on board the brains of Hillsman, who Slate once dubbed “the greatest political adman.” (Most of Hillsman’s ads can be viewed either here or here).
— Sameer Lalwani