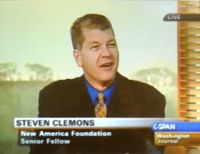 Tomorrow morning, Thursday, I will be on C-Span’s Washington Journal starting at 8 am EST discussing the foreign policy views of John McCain and Barack Obama.
Here are the texts of major speeches the candidates gave today.
John McCain in Manchester, New Hampshire.
Barack Obama in Richmond, Virginia.
See you tomorrow morning.
— Steve Clemons