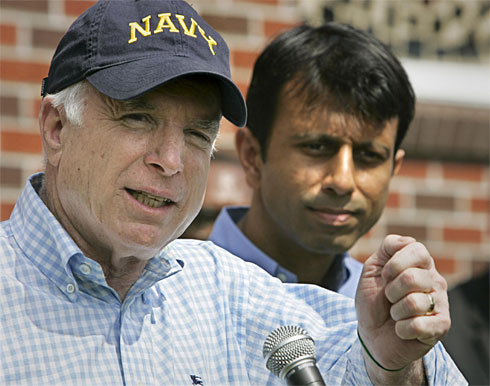 Senator McCain’s presidential campaign team has put out a call for DC interns:

John McCain needs YOU!
The John McCain 2008 Presidential Campaign is looking for interns and volunteers for full-time positions available immediately in our Arlington (Crystal City), headquarters.
Interns/volunteers will work with staff on various projects essential to the campaign and play a significant role in building Senator McCain’s grassroots efforts. Interested candidates should send a resume and cover letter to: Volunteer4@JohnMcCain.com
Thank you!
Jacob Champion, Deputy Director of Volunteers
Volunteer4@JohnMcCain.com

I am one of those who would like to see the best and brightest young people engage in either party, and campaign internships can be great ladders up. A young friend of mine who we nicknamed “wombat” started out four years ago as a political organizer in the DC office of the Kerry campaign and by the time he was done, he was hanging out with John Kerry. He’s not quite running the Democratic Party — but he’s extraordinarily networked, and he’s humble and has his head squarely (if not straightly) on his shoulders.
So I do encourage young, balanced go-getters who tilt Republican to apply to Senator McCain’s office — but while doing this, read as much as you can written by Senator Chuck Hagel, Senator Richard Lugar, former Senator Lincoln Chafee, former New Jersey Governor and EPA Administrator Christine Todd Whitman, former Senator Jack Danforth, and former National Security Advisor Brent Scowcroft.
And then if you feel so inclined, be sure to “politely” share with Senator McCain (or more likely his campaign staff) your openness and flexibility in reconsidering Don’t Ask/Don’t Tell, your open-mindedness on civil unions and gay marriage, your support of gay adoption and gay parenting (like Mary Cheney has exemplified), and your objection to conducting wars without raising money to pay for them. You might add that wars are really last, final, no other option acts and not really appropriate to chuckle or sing about.
I know a bunch of folks over there in McCain Land and admire many of them — but best not to mention my name or this blog to the foreign policy types.
Good luck applying!
— Steve Clemons

18 comments on “McCain Puts Out Call for Interns”