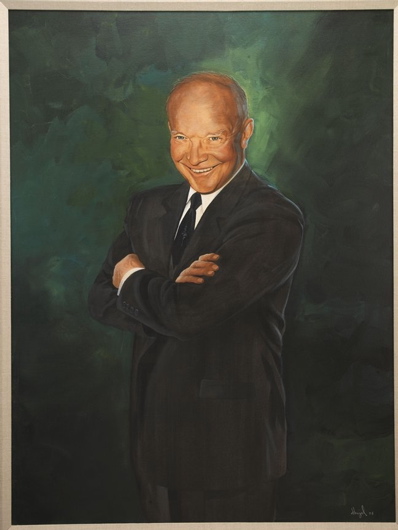 (portrait of President Dwight Eisenhower by Mike Hagel; hanging in Senator Chuck Hagel’s private Senate office)
Joe Lieberman may lament what he considers to be the shift of the Democratic Party, but he may also want to reflect on how neoconservatives have so dramatically changed and warped the Republican Party in foreign policy.
Spend some time with these lines from Eisenhower, gathered together for The Washington Note by regular reader Michael Beaver. They remind me of Senator Chuck Hagel’s anger about reckless wars of choice in the Middle East, his view that we need a new centrist social contract across our nation, that we need to make America an example that inspires others around the world — not a nation that tries to force feed democracy down the throats of others. This reminds me of the time Chuck Hagel gave a speech for the New America Foundation in which he said posing questions to the White House about matters of war and peace was not disloyal and was absolutely patriotic.
If I was in Barack Obama’s shoes and Hillary Clinton had turned down my offer to run as Vice President, I’d go with Eisenhower in a unity ticket — and because Eisenhower is not available, I’d go for Chuck Hagel. John McCain couldn’t put a ticket together to beat that combo.
From TWN reader Michael Beaver’s Eisenhower-isms roster:

I like to believe that people in the long run are going to do more to promote peace than our governments. Indeed, I think that people want peace so much that one of these days governments had better get out of the way and let them have it.
— Dwight D. Eisenhower
If men can develop weapons that are so terrifying as to make the thought of global war include almost a sentence for suicide, you would think that man’s intelligence and his comprehension. . . would include also his ability to find a peaceful solution.
— Dwight D. Eisenhower