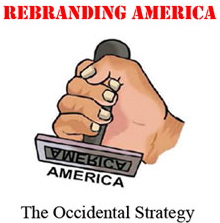 Some Occidental College students in a “grand strategy course” have just gone through an interesting exercise contemplating and considering solutions to America’s spate of strategic problems, and they have just issued a report on their findings called Rebranding America. (pdf here)
I have found much in the student report with which I agree — and a few things I don’t.
For instance, I’m not in sync with their seeming confidence in the military dimensions of America’s national security portfolio. They state they want to “maintain military supremacy” in one part of the report, and frankly, I don’t think that that means much at this point in America’s palette of strategic choices. It has been America’s seeming over superiority in a given kind of potential warfare that has actually made the U.S. relatively weak given in other spheres — particularly in trying to deter nuclear weapons proliferation and its vulnerability to assymetric warfare tactics.
But these students of close Clinton family friend and former U.S. Ambassador to Finland Derek Shearer have engaged in something that should be telegraphed across the country to other college professors and students. The model of what they did helps build habits of thinking and approach that encourage strategic, proactive policy thinking, rather than the ad hoc, reactive approach that so frequently gets hijacked by special interests, swagger, or emotionalism.
Specifically, the students followed these steps:

1. They engaged in a systematic review of challenges that involved a clear specification of the “problem” or challenge.
2. They then worked to identify America’s “strategic interests” and to put them in context with the challenge.
3. They considered the “means” that could be used for a variety of scenarios over a 6 month period.
5. They then specified a set of policy options and “means” over a one-year and beyond time horizon.
6. And then — without much bias that I could find — they considered a variety of possible outcomes.

The foreign poicy issues areas the students considered were Iraq; Transnational terrorism, al-Qaeda and torture; relations with Europe, NATO, Russia, and CIS; Iran and nuclear proliferation; oil and energy issues; US-UN relations, humanitarian intervention and global health; China, Pakistan & Afghanistan; Israel-Palestine; illegal immigration & NAFTA.
I very much like this report and its methodology and want to provide in full just one section from “Rebranding America” on Israel-Palestine. This section was authored by Occidental students Anna Castagnozzi-Bush and Matthew Mikuni:

Israel-Palestine
Problem
A solution to the Israel-Palestine question is one that has eluded the international community for more than half a century. While progress has been made since then, in the past four years advancement towards resolution of the conflict has been mostly stagnant. In addition, the situation has become even more complex, with the takeover of the Gaza Strip by Fatah and the exclusion of Hamas cabinet members from Prime Minister Abbas’ administration. The result is that there no longer is a single person who is viewed as the legitimate representative of the Palestinian people. Also, Prime Minister Olmert’s invasion of Lebanon has depleted much of his political capital that could have been used to offer meaningful concessions to a Palestinian state.
Strategic Interest
It is crucial to the United States’ security, economy, and international political stability that the government undertakes a strong and active role in the peace process with a clear and consistent position on absolute and permanent borders in accordance with a strategy for the economic development and inclusion of Palestine, as well as regional stability. This necessitates a comprehensive approach inclusive of Palestine and Israel’s regional neighbors and partners to secure a forward thinking solution as opposed to previous strategies primarily focused on ideological and societal grievances.
When we are seen as unconditionally supporting Israel and ignoring the plight of the Palestinian people, our credibility and image are hurt in the Middle East. However, if we are also seen as ignoring Israeli concerns and grievances, their willingness to accept a peace proposal will run into significant obstacles. The Israel-Palestine issue has also been used quite effectively to help foster anti-American extremism throughout the Middle East. If the United States can facilitate a peaceful and fair solution between the Israeli and Palestinian people, a major recruiting tool for al-Qaeda and other terrorist groups will be effectively neutralized. Being seen as a neutral and effective arbiter in resolving this conflict is an essential part in rebranding America to the rest of the world.
Means
First Month:

~ The President should visit both Israel and the Palestinian territories to show his or her commitment to the resolution of the conflict.
~ Prior to visiting, the President should appoint a special envoy to deal specifically with the Israeli-Palestinian conflict to accompany the President during his or her first visit. Tony Blair will be an important person in representing the other Quartet members, so constant contact between the two envoys will be essential.
~ Send the US Ambassador back to Damascus to re-open diplomatic ties, showing our acknowledgement of Syria’s vested interest in the resolution of the conflict.
~ Bring the Quartet back together to put pressure on both the Israelis and Palestinians and monitor the implementation of any agreements reached during negotiations. Saudi Arabia should be included as they have come to be the closest to an ‘Arab spokesman’ in the Israeli-Palestinian conflict.
~ Consult the RAND Palestinian State Study Team for any updates that they might have for building a Palestinian State in light of any recent changes in the region.

~ Work with Israel (secretly) and Fatah (openly) to end the blockade of Hamas in the Gaza Strip.
~ A Palestinian state will never be considered legitimate if it does not include the Gaza Strip along with the West Bank. Hamas can serve as a serious impediment if they are ignored or excluded from the peace process.
~ If Abbas can be seen as the one liberating the Gaza Strip from the Israeli blockade, it will strengthen him and other moderates in the administration and undercut the message of violence coming from Hamas.
~ Return the Golan Heights to Syria in exchange for security agreements from the Quartet, along with a personal security agreement between the US and Israel to defend it if it is invaded by other Arab states.
~ This Security guarantee should be contingent on Israel adhering to any agreements they make during the peace process.
~ By making the first step in giving the Golan Heights back to Syria, Syria will lose its motivation to prolong the Israeli-Palestinian conflict through Hezbollah, Hamas, or any other of the groups it harbors.
~ Negotiations (possibly backchannel) must be opened with Iran. Iran provides Hamas with much of its funding, and negotiations with Iran might be able to convince them to either limit funding to Hamas, or at the very least, make it conditional on their participation in the peace process.
~ Work with the Quartet to appoint a NGO coordinator that will separately fund and synchronize projects within Israel and Palestine. A committee with a representative from each NGO should be formed to give participating NGOs an official forum to express their concerns and questions.

First Year and beyond:

~ Design UN aid packages to assist Arab countries that hold Palestinian refugees.
~ These aid packages would also be administered or monitored by the Quartet to avoid cases of wasteful spending or corruption.
~ Huge numbers of Palestinian refugees, especially in Lebanon, might immigrate in huge numbers to a new Palestinian State, possibly collapsing its economy. Aid packages should also be designed to help those refugees integrate into the economies of the countries they currently live in.
~ Use foreign aid, along with Palestinian workers, to rebuild the infrastructure of the Palestinian territories (e.g., roads, power, water, sanitation, public buildings).
~ This will help the chronic unemployment that currently exists in the Palestinian territories and will provide a solid foundation on which a viable economy could be realized.
~ UN officials, preferably those who have expertise in specific fields, such as managing a power plant, should work side by side with the Palestinian officials in charge of the project to increase efficiency and reduce corruption.

Possible Outcomes
The creation of a new Palestinian state will finally be put back on track with the implementation of the policies listed before. The negotiations will inevitably be very tough, as of right now many people are skeptical of the prospect of peace, and the number of those advocating against compromise on key issues, on both the Israeli and Palestinian side have increased. If everything is successful, the prospects for a peaceful and economically prosperous Palestinian state can finally be realized. No longer will Israelis have to flee to bomb shelters when an air raid horn sounds, nor will Palestinians be forced to live in decrepit conditions or in the fear of an Israeli incursion or surgical strike. By being the country to actively restart the peace process (although we won’t be alone) we can empower moderates all around the Middle East and dampen the appeal of the extremists in the region.
Authored by Anna Castagnozzi-Bush & Matthew Mikuni

We need the kind of exercise these students were engaged in to proliferate through our college system. While this kind of work is probably standard at the graduate level, I’m not familiar with many undergraduate courses that engage in this kind of strategic think work. I imagine that Steve Weber at UC Berkeley and Bruce Jentleson at Duke probably offer similar, challenging work to their undergrads — but my sense is that we need more.
We may not need a single “Mr. X” again to help us sort out our future strategic architecture — we probably need a number of them. And Occidental College may indeed produce one of these needed intellectual architects.
After all, Barack Obama went to Oxy — as did my colleague and friend Steve Coll who won the Pulitzer for Ghost Wars: The Secret History of the CIA, Afghanistan, and Bin Laden, from the Soviet Invasion to September 10, 2001 and now has The Bin Ladens: An Arabian Family in the American Century out in bookstores.
— Steve Clemons