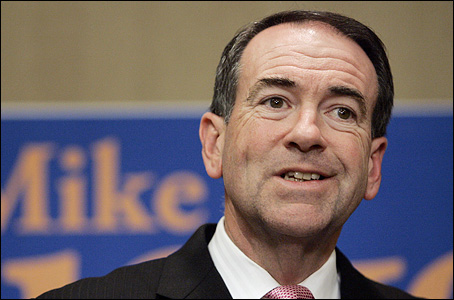 Mike Huckabee spoke to the National Rifle Association on Friday and while on stage, there was noise in the background off stage about which he said, according to CNN:

“That was Barack Obama, he just tripped off a chair, he’s getting ready to speak,” said the former Arkansas governor, to audience laughter. “Somebody aimed a gun at him and he dove for the floor.”

There are a lot of outrageous things being said in this presidential race — and I think it will get much worse, but this is a kind of recklessness that can’t be tolerated.
To put the issue on the table, this is a time when I fear the impact of an assassination attempt on various of our political leaders and the candidates. The impact could upend the American political system at a very fragile time.
To joke about it — and intimate the casual possibility of such a thing is unconscionable.
Huckabee should publicly and immediately apologize.
— Steve Clemons

Looking for the Next “Mr. X”
UC Berkeley’s Torturer