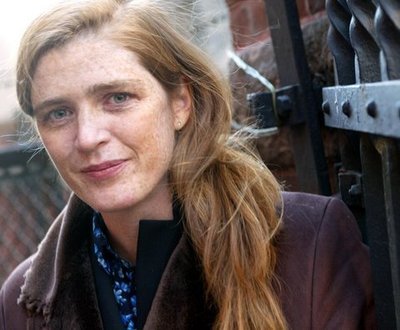 Reading Vaclav Havel’s “To The Castle and Back” yesterday, I got wildly distracted, and found myself YouTubing my DC power/intellect crush: the luminous Samantha Power.
Havel’s book is a tremendous read — scattered and tangential, but fascinating nonetheless. It feels as if one sat down at the playwright’s cluttered desk in 2003, and was privileged to rifle through memos and diary entries and jotted ‘notes to self,’ scattered recklessly about.
The line from the memoir that brought me to Power, and to Sergio De Mello, began from a query about leaving so much of the communist bureaucracy intact in the Czech government. Havel responds, “after the Velvet Revolution, personnel changes were more difficult and took a longer time. You can’t produce a thousand judges overnight.”
It reminded me of something Martti Ahtisaari told me last winter: that in nearly all the places he has worked, we’ve been dangerously slow to bring the rule of law up to speed, and, in particular, business law.
As we begin to re-imagine the world for the twenty-first century — Sergio’s world, as Power is fond of saying, of “broken people and broken states” — it seems that building successful legal systems needs a bigger niche than we typically afford.
Global warming, and all that it will bring to the forefront — power outages, food shortages, increased tropical storms generated by larger and warmer incubating zones that stay heated for longer — should lead us to expect more faltering governments and broken systems.
Law is often listed in a litany of woes: corruption, education reform, poverty reduction, clean water, health care expansion — but it needs to begin to rise above.
Hamas won Gaza on a justice and anti-corruption platform; the Taliban, we know, draws a good deal of its support from providing a perverted justice in place of lawlessness; there’s no disputing that stability follows security in counterinsurgency.
The incredible success of military exchanges has often struck me. Whether it’s American sponsorship of foreign officers to study at war colleges or merely simulations and war games that bring colonels and petty officers into contact, most in the armed forces can’t speak highly enough of the relationships built and the exchanges of knowledge produced.
USAID does little in the way of legal sabbatical or fellowship, from what I can discern.
School of the Americas — or whatever it’s called now — would be better replaced by schools of international law. Of course — in reference to Havel’s quote — judges are not legal systems. Police, corrections systems, and any number of other factors are all intricate parts. As Power notes at about the 30 minute mark, police in the developing world are overwhelming oppressive forces, rather than martials of justice. De Mello, Power’s argues, thought that strengthening the power and structure of law was key to avoiding human rights abuses.
How about some tax dollars to train lawyers rather than privates, high courts rather than high commands?
— Brian Till

19 comments on “Thoughts on Law & an Anarchic Century”