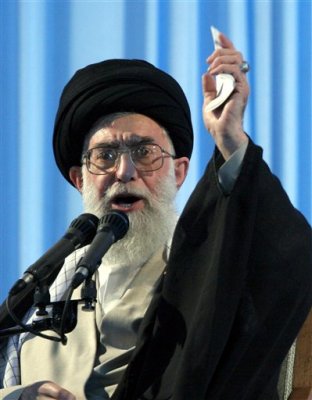 A few moments ago, author of Bitter Friends, Bosom Enemies: Iran, the U.S. and the Twisted Path to Confrontation and one of DC’s best Iran experts Barbara Slavin wrote to me through Facebook and said:

steve, iran ceased being an islamic republic a week ago. now it’s just another military dictatorship.

She is right. And given that collapse of legitimacy and the mystique of the Islamic Revolution, Ali Khamenei and Mahmoud Ahmadinejad and those who organized the head-crackers to assault Iran’s citizens will probably have a fragile grasp on their lives from here on out.
The New York Times‘ Roger Cohen who has been braving the streets of Tehran today just filed a gripping account of today’s events, but he too notes that Khamenei, Iran’s Supreme Leader, has lost “his aura.”
From Cohen’s piece which should be read in its entirety:

The Iranian police commander, in green uniform, walked up Komak Hospital Alley with arms raised and his small unit at his side. “I swear to God,” he shouted at the protesters facing him, “I have children, I have a wife, I don’t want to beat people. Please go home.”
A man at my side threw a rock at him. The commander, unflinching, continued to plead. There were chants of “Join us! Join us!” The unit retreated toward Revolution Street, where vast crowds eddied back and forth confronted by baton-wielding Basij militia and black-clad riot police officers on motorbikes.
Dark smoke billowed over this vast city in the late afternoon. Motorbikes were set on fire, sending bursts of bright flame skyward. Ayatollah Ali Khamenei, the supreme leader, had used his Friday sermon to declare high noon in Tehran, warning of “bloodshed and chaos” if protests over a disputed election persisted.
He got both on Saturday — and saw the hitherto sacrosanct authority of his office challenged as never before since the 1979 revolution birthed the Islamic Republic and conceived for it a leadership post standing at the very flank of the Prophet. A multitude of Iranians took their fight through a holy breach on Saturday from which there appears to be scant turning back.
Khamenei has taken a radical risk. He has factionalized himself, so losing the arbiter’s lofty garb, by aligning himself with President Mahmoud Ahmadinejad against both Mir Hussein Moussavi, the opposition leader, and Ali Akbar Hashemi Rafsanjani, a founding father of the revolution.
He has taunted millions of Iranians by praising their unprecedented participation in an election many now view as a ballot-box putsch. He has ridiculed the notion that an official inquiry into the vote might yield a different result. He has tried pathos and he has tried pounding his lectern. In short, he has lost his aura.

99 comments on “Khamenei’s Mystique Shattered in Eyes of Iranians”