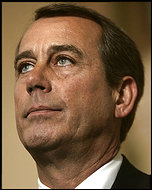 George Stephanopoulos of ABC’s This Week pushed House Republican Majority Leader John Boehner (R-OH-08) who gave an astonishingly rejectionist response on the significance of contemporary climate change trends.
My hunch is that Boehner is positioning himself to be vice presidential running mate material for Sarah Palin in 2012 — as these answers were the sort she’d give.
This Week with George Stephanopoulos
18 April 2009, interview with Rep. John Boehner, House Republican Leader:

STEPHANOPOULOS: Let me ask you then about energy. We showed your statement on the president’s decision through the EPA to regulate greenhouse gases. Also, you’ve come out against the president’s proposal to cap-and-trade carbon emissions.
So what is the Republican answer to climate change? Is it a problem? Do you have a plan to address it?
BOEHNER: George, we believe that our — all of the above energy strategy from last year continues to be the right approach on energy. That we ought to make sure that we have new sources of energy, green energy, but we need nuclear energy, we need other types of alternatives, and, yes, we need American-made oil and gas.
STEPHANOPOULOS: But that doesn’t do anything when it comes to emissions, sir.
BOEHNER: When it comes to the issue of climate change, George, it’s pretty clear that if we don’t work with other industrialized nations around the world, what’s going to happen is that we’re going to ship millions of American jobs overseas. We have to deal with this in a responsible way.
STEPHANOPOULOS: So what is the responsible way? That’s my question. What is the Republican plan to deal with carbon emissions, which every major scientific organization has said is contributing to climate change?
BOEHNER: George, the idea that carbon dioxide is a carcinogen that is harmful to our environment is almost comical. Every time we exhale, we exhale carbon dioxide. Every cow in the world, you know, when they do what they do, you’ve got more carbon dioxide. And so I think it’s clear…
STEPHANOPOULOS: So you don’t believe that greenhouse gases are a problem in creating climate change?
BOEHNER: … we’ve had climate change over the last 100 years — listen, it’s clear we’ve had change in our climate. The question is how much does man have to do with it, and what is the proper way to deal with this? We can’t do it alone as one nation. If we got India, China and other industrialized countries not working with us, all we’re going to do is ship millions of American jobs overseas.
STEPHANOPOULOS: But it sounds like from what you’re saying that you don’t believe that Republicans need to come up with a plan to control carbon emissions? You’re suggesting it’s not that big of a problem, even though the scientific consensus is that it has contributed to the climate change.
BOEHNER: I think it is — I think it is an issue. The question is, what is the proper answer and the responsible answer?
STEPHANOPOULOS: And what is the answer? That’s what I’m trying to get at.
BOEHNER: George, I think everyone in America is looking for the proper answer. We don’t want to raise taxes, $1.5 to $2 trillion like the administration is proposing, and we don’t want to ship millions of American jobs overseas. And so we’ve got to find ways to work toward this solution to this problem without risking the future for our kids and grandkids.
STEPHANOPOULOS: So you are committed to coming up with a plan?
BOEHNER: I think you’ll see a plan from us. Just like you’ve seen a plan from us on the stimulus bill and a better plan on the budget.

You heard it here first (or at least early). . .Palin-Boehner in 2012.
Obama would have a lot of fun with that pair.
— Steve Clemons