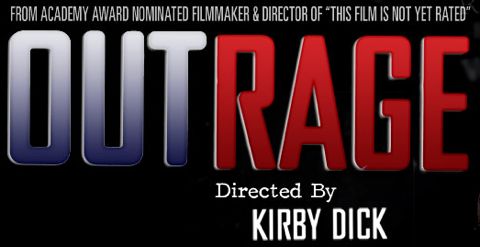 The Washington Note is supporting the first DC premier screening of the new film, OUTRAGE — an expose on the secret lives of gay politicians.
The film opens in selected theaters in New York, Los Angeles, San Francisco, Philadelphia, and Washington, DC on Friday, May 8th — but I am supporting a screening in Washington at the Landmark E Street Cinemas on Tuesday, April 28th at 7 pm.
Michael Rogers, who was the first to lay the groundwork for outing former Idaho Senator Larry Craig, figures heavily in the film with his work in exposing politicians who have consistently voted against the civil rights and in favor of legislation that discriminates against gays and lesbians.
Others interviewed are US Representatives Barney Frank and Tammy Baldwin, former New Jersey Governor Jim McGreevey, former Congressman Jim Kolbe, activist Larry Kramer, former US Ambassador to Romania and Council for Global Equality senior adviser Michael Guest, radio personality Michelangelo Signorile, and myself.
If any regular — lurking — or even closeted — TWN readers would like to join me for this premier screening and to meet Director Kirby Dick, who was nominated for an academy award for his film, This Film is Not Yet Rated, send me a note. I’d be happy to provide tickets for readers — but don’t fail to show up.
And. . .very cool. . .I just learned that Washington Life magazine will be covering the event.
— Steve Clemons

8 comments on “Invitation to “OUTRAGE” by Kirby Dick”