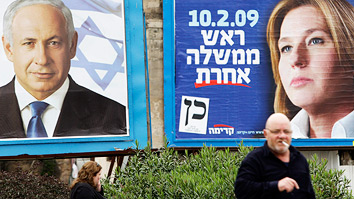 My New America Foundation colleague Daniel Levy, who is in Tel Aviv and voted today, is quoted in the segment below and offers two take-aways from the results of Israel’s elections, the winner of which is still being sorted out and will be disputed no matter the outcome.
Levy suggests that whether Livni or Netanyahu leads the next government, either coalition will be more fragile than what we have had under Kadima-led coalition these last several years. Avigdor Lieberman’s party which wants to racially disaggregate Arabs and Jews is a considerable factor.
And that progress on Israel-Palestine talks can no longer rest with divided Israelis and divided Palestinians but depends on the heavy engagement of the U.S. and other key regional stakeholders.
From Jonathan Freedland’s coverage in The Guardian:

A clearer winner is surely Avigdor Lieberman, the ultra-nationalist who leads Israel’s third largest party. At a victory celebration he said he held “the key” to Israel’s next government. And he does. Last night both Netanyahu and Livni put in calls to Lieberman, confirming his status as the kingmaker – one who will try to extract a high price. He suggested his priorities would be the release of Gilad Shalit, the Israeli soldier held by Hamas, and the “toppling” of Hamas in Gaza.
As neither Livni nor Bibi can rule without him – unless they create a unity government excluding him – he may get what he wants.
The losers are easier to count. Labour was once Israel’s natural party of government, ruling from 1948 to 1977. Yesterday, it trailed in fourth, Ehud Barak – once prime minister – barely polling ahead of the sectarian religious parties. The dovish, civil rights party Meretz was reduced to a handful of seats.
But there are more substantial losers. First, the Israeli political system is confirmed as dysfunctional. When a ruling party cannot muster a quarter of the seats in parliament, something has gone badly wrong. It means any government will be formed only after protracted horse-trading. Strikingly, all the main leaders – including Lieberman – spoke of the need to reform the political system.
The second serious loser is the Middle East peace process. According to Daniel Levy, analyst at the New America Foundation: “We will now have a weak, unstable government in Israel to join the weak governments in the Palestinian territories. They are not going to be able to make progress by themselves.” With both sides hobbled, they will simply lack the strength, says Levy. “It will have to be driven from the outside.” And that means Washington.

Lautenberg: Don’t Hide Those Who Have Died in Combat
Obama Must Make Saudi Arabia a Major Priority