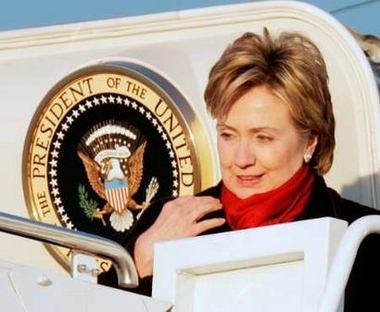 Hillary Clinton is making a wrong-headed play in her call to President Bush to boycott the opening ceremonies of the Beijing Olympic Games.
After the collision of an American EP-3 spy plane and a Chinese jet fighter in April 2001, neoconservative high priest Richard Perle advocated preempting China’s bid to host the 2008 Olympics. He felt that keeping China from being able to enjoy the prestige of hosting the Olympic games was the best way to punish China for the transgression of harassing an American military plane that may have been in its air space.
On CNN’s Crossfire, I debated Perle on this issue and suggested that the approach he advocated was ultimately harmful to American interests and would seriously harm our ability to generate a broad array of contacts with China in different spheres through which we could hopefully constructively influence and encourage what Robert Zoellick coined a “responsible stakeholder” track.

In recent months, Fred Hiatt, editor of the Editorial Pages of the Washington Post, advocated boycotting the Olympics because China was failing to use its influence on Burma’s military junta. Others have advocated keeping U.S. athletes at home because China continues to deal with the Government of Sudan and has done little to advocate for relief in Darfur. James Fallows and I both countered Hiatt on this.
And now Hillary Clinton has called for President Bush to boycott the opening ceremonies of the games in Beijing in response as a rebuke for not stopping the violent clashes in Tibet and not using its leverage with Sudan to stop genocide in Darfur.
This stance by Hillary Clinton is as wrong-headed as her vote on the Kyl-Lieberman IRGC amendment calling for the Iranian Revolutionary Guard to be classified as a terrorist organization and as nationally self-wounding as her vote on the 2002 Iraq War Resolution.
Hillary Clinton is not out of bounds in advocating for other nations to look into their souls and to call for adherence to basic human rights conventions. She is not wrong to speak about human rights in every speech she gives and to speak to advocates of liberalism and choice who have been incarcerated in China, in Egypt, in Burma, or wherever else there are political prisoners.
But she is out of bounds and reckless when calling for the weight of the presidency to be used to punish another nation at an event which is drawing China into the blue chip end of the international order, into global institution building and stakeholding, and which is stroking China’s national pride at a key point in its ascendancy as a self-realized important power.
Hillary Clinton’s call for boycotting the opening ceremonies is an example of a simple-minded, binary approach to US-China relations.
Apparently, she has been led to believe that if Bush is absent at the ceremonies that China will help us on Sudan or allow Tibet a track to political autonomy or independence. This is wrong and naive. China will do neither – and if anything, we will embarrass those in the China establishment who are advocates of deal-making with America and proponents of responsible global stakeholding, which has been the course we have seen China on.
There is no doubt that China’s positive role in the troubled Six Party Talks moved our affairs with North Korea forward – even though this process proves to have predictably unpredictable swings up and down. China also proffered some counsel to Iran behind the scenes in advocating release of several intellectuals that Iran had arrested last year as China was not eager to see a substantially tightened third round of economic sanctions out of the UN at that time, and China helped give Iran an important nudge when we needed it.
America and the world have a serious brewing problem with Iran and an ongoing challenge with North Korea. China has secured strategic footholds in Africa, Latin America, Southeast Asia, and is spreading its influence in the Caucuses. China is not a natural ally of Russia – in fact, quite the reverse – and yet bumbling American policy seems to be throwing them together in common circumstances in ways that should not be happening.
Hillary Clinton or any President needs to avoid the temptation to pander to the American public when crises with the key global powers emerge. They need to demonstrate an awareness of our core interests with China and what we most want from China in the arena of international affairs.
Nukes should be at the top of that list – and then there should be a cascading set of second and third and fourth and fifth priorities with a state like China. A new or revised economic arrangement with China would be second on my list – and then perhaps a serious commitment to climate change in third or fourth place. Human rights should be on the list — but make the pursuit of Chinese subscription to a higher human rights bar a serious effort characterized by consultations, encouragement, deal-making that involves incentives and yes, disincentives. But Clinton gave no sense of a fuller, serious game plan on the human rights front.
Which battles with China do we need to stalemate on, or delay, or even lose to achieve our primary national security and geopolitical objectives? And more importantly, what battles does China really need to win to be able to work with us?
But what we got from Hillary Clinton today was a shallow, binary, knee jerk impulse to withdraw the prestige of American attendance at an event that will not succeed in achieving the baseline objectives with Sudan or Tibet – and very well could raise China’s price for cooperating with us on other of the more important fronts in which we need them.
A call to boycott any aspect of the Olympics is part of the current of not wanting to deal or directly negotiate with other nations on the “bad countries” list. It is a silly and counterproductive impulse that Hillary Clinton should reconsider.
This kind of posturing makes America look incredibly immature — as if it has lost touch with the realities of statecraft and with its own important role as a global stabilizer.
— Steve Clemons