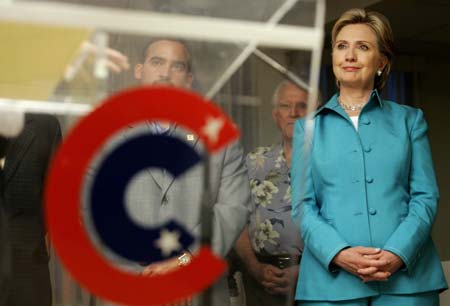 Senate Foreign Relations Committee Ranking Member Richard Lugar (R-IN) submitted quite a number of written questions (pdf here) to Hillary Clinton to answer as part of the process of the Senate considering her nomination as Secretary of State.
I’ve always been impressed by Lugar’s shrewd sense of the geostrategic order and what the opportunities for action and change are — and aren’t. During the first round of Petraeus/Crocker hearings about the surge in Iraq, it was Lugar’s opening statement that was the most compelling critique of the Bush administration’s absence of strategy. In fact, it was Lugar who essentially implied that the surge was more tactic than strategy and demanded to know more about the other moving parts of America’s foreign policy game plan in the Middle East.
If folks have time, they should read through this instructive document as it provides a quick and comprehensive lesson in American foreign policy and national security issues.
The Cuba questions posed by Lugar interest me today. He had several, and I’ll provide Senator Lugar’s questions and Hillary Clinton’s responses here (page 58-59):

Cuba
101. The fiftieth anniversary of the Cuban Revolution on January 1, 2009, presents an auspicious moment to reexamine the contentious US-Cuban relationship. Please provide your views on reviewing all elements of Cuba policy.
There are many ways that we can send a message to the Cuban people that the United States intends to play a positive role in their future. President-Elect Obama believes the Cuban-Americans especially can be important ambassadors for change in Cuba. As such, he believes that it makes both moral and strategic sense to lift the restrictions on family visits and family cash remittances to Cuba. We do not currently have a timeline for the announcement of such a new policy, and the Obama-Biden Administration will consult closely with Congress as we prepare the change.
President-Elect Obama also believes that it is not time to lift the embargo on Cuba, especially since it provides an important source of leverage for further change on the island.
102. Despite the official embargo, agricultural trade represents a significant area of interaction between the United States and Cuba. Since the Trade Sanctions Reform and Export Enhancement Act (TSRA) of 2000 lifted sanctions on sales of agricultural commodities and medicine, the U.S. has become Cuba’s most important food provider, although many restrictions and licensing requirements remain in place. Please provide your view on expanding trade with Cuba.
We anticipate a review of U.S. policy regarding sales of agricultural commodities to Cuba and look forward to working with members of the Committee and other members of Congress as we move forward in the consideration of appropriate steps to take to help advance U.S. interests and values in the context of relations with Cuba.

103. The United States has pursued cooperation with Cuba in drug interdiction on a very limited case-by-case basis. Please provide your views on a broad formalized agreement or Memorandum of Understanding between the U.S. and Cuba in order to improve coordination of anti-drug efforts and provide for exchange of information.
Given the threat posed by narcotics trafficking, it is important to cooperate with Cube where such cooperation is effective in stopping trafficking.

105. Please provide your views on US-Cuban cooperation on energy security and environmentally sustainable resource management, especially as Cuba begins deep-water exploration for potentially significant oil reserves.
We anticipate a review of U.S. policy regarding Cuba and look forward to working with members of the Committee and other members of Congress as we move forward in the consideration of appropriate steps to take to help advance US interests and values in the context of relations with Cuba.

First of all, Senator Lugar’s questions themselves imply a plea for a common sense pivot in US-Cuba relations. He acknowledges that 50 years of contentiousness have not produced policy results that seem impressive. Without showing all of his cards, Lugar seems to be telegraphing that the time has come to end the last place in the world where the Cold War is still raging.
Kudos to Lugar for doing this.
On Hillary Clinton’s front, her answers were conventional and largely unimpressive in a geostrategic sense — with the single exception that she has promised a “full review” of US-Cuba relations.
In answering Lugar’s first Cuba question, Clinton missed an opportunity to frame US-Cuba relations in a broader geostrategic setting.
Because George W. Bush strangled contacts too tightly, even right wing Cuban-Americans are asking for parts of the embargo to be lifted — and recently most Latin American states including Mexico and Brazil asked the US to end the embargo of Cuba. Clinton didn’t need to agree with these appeals — but not to look at the echo effects of US-Cuba relations elsewhere in the region, and the world, was an error.
Also, Hugo Chavez and Venezuela have been attempting to ideologically succeed Castro and essentially to colonize the Cuban people as part of his platform. I have been to Cuba — and the Cubans generally detest Chavez’s pretensions about them and their country. Clinton should have given some hint that she is aware of the competition with Chavez in Latin America and that the easing of sanctions and the promotion of people to people exchange could be a smart strategy similar to what the US has done with other Communist countries, particularly Vietnam.
I hope someone in the press corps asks Hillary Clinton and/or Barack Obama whether they “feel” it is constitutional and morally acceptable to distinguish between different ethnicities and lineages of AMERICANS.
Clinton and Obama both support lifting restrictions on “Cuban-Americans” who want to travel back and forth between the US and Cuba. I find this discriminatory and repulsive. It was wrong for any US President to ever impose opportunities for some classes of Americans divided from others. But essentially, can either Hillary Clinton or Barack Obama face the cameras and say YES, I favor a discriminatory approach to travel.
As Congressman Jeff Flake (R-AZ) has repeatedly said, it is a human right to travel — and he will not abide by a US government that tells any US citizen where he or she can travel. Communist governments are the ones that are supposed to be about restrictions on freedoms — not the United States of America — and yet that is what Hillary Clinton is promulgating.
And on the question of lifting or maintaining the embargo, I think Hillary Clinton’s answer is wrong-headed and divorced from the simple truth that it doesn’t matter except that it harms American interests and leverage. 183 other nations have voted against the United States in the United Nations on the embargo. Cuba is enjoying investment from abroad — and more of our allies are reestablishing and beefing up their diplomatic missions there. To have leverage in Cuba, America needs to be engaged.
Hillary Clinton would be wise to listen to Brent Scowcroft’s words on the US-Cuba embargo:

I am glad to see that Hillary Clinton may be deferring on some questions, particularly the question of Cuba’s status on the US roster of state sponsors of terrorism, until a “full review” of the relationship is done. It is great to hear that something comprehensive may be ordered — so as to move this relationship forward.
But essentially — as Secretary of State and Barack Obama’s most important envoy — it is essential that Hillary Clinton realize that Cuba should no longer be treated like a domestic policy problem of this country and be dealt with as a realistic foreign policy challenge and opportunity.
Cuba is actually the lowest hanging fruit for America to quickly make progress with and show a different side to America’s character and a willingness to end the Cold War once and for all.
Clinton can improve her grade a lot by seeing and speaking to this opportunity.
— Steve Clemons

Inaugural Weekend: The TWN Game Card
Israel Undermining its Own Project in the Middle East

15 comments on “Hillary Clinton On Cuba Questions: I Give Her a “C+””