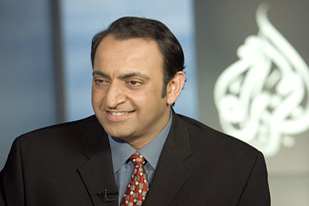 (Riz Khan anchors the Riz Khan Show on Al Jazeera English. This “Note” is part of a series of posts that personalities from Al Jazeera have been sharing with readers of The Washington Note.)
New York is going into rehab – to use an increasingly popular term.
The locals are finally recovering from the craziness of that week of United Nations General Assembly, Clinton Global Initiative, and a host of other events, such. The Global Creative Leadership Summit is one such gathering I particularly enjoy attending as it brings together not only leading political figures, but also a host of great minds from the worlds of science, business and the arts, in the hope of putting a fresh perspective on some of the issues facing the world today.
Cynics say that the UNGA doesn’t really achieve much – except give some of the more eccentric or less-favoured world leaders a chance to rock the boat – as in the case of the Libyan leader, Muammar Gadaffi, who put on quite a show this year.
The gathering does, however, create a unique opportunity for “bi-lateral” meetings, where countries that don’t often meet in obvious public situations get to sit down and do some serious talking. The results of these bi-lateral and side-line meetings usually take some time to make it to the media – by which time they seem to have no connection to the circus in New York.
The Obama administration is certainly taking a different approach to foreign policy from the preceding Bush administration – with the idea that engagement could work better with countries such as Iran, North Korea and Myanmar (formerly Burma).
But not everyone is convinced President Obama is on the right path. His recent plan to scrap the multi-billion dollar missile defence system in Poland and the Czech Republic had his critics jumping up and down, claiming he had crumbled under pressure from an angry Russia. Pragmatists say it is a far less simple explanation than that.
Either way, whether or not the Obama administration can manage a path of pro-active engagement hand-in-hand with allies – versus a lonely unilateral march across the globe will be something to look out for in the coming weeks and months.
At Al Jazeera English, we are constantly looking to highlight international issues and cover parts of the world that are often neglected by others.
While the UNGA is now over, we’ll continue to examine the constantly changing relationships around the world at a political, business and social level… and always welcome direct input from our viewers across the globe.
We hope you can tune in and participate in this global conversation.
In the DC area, Al Jazeera English is available on Comcast channel 275, Cox channel 474, and Verizon FIOS channel 457, and anyone can catch us 24/7 streaming live and for free at www.livestation.com/aje. If you don’t have AJE on your TV and want to send a note to your cable or satellite provider in the US or Canada to carry AJE, or just want to find out more about AJE, I encourage you to head to www.iwantaje.net.
Thanks again to Steve for letting me write a few short notes on his site during what was a crazy yet exciting experience in New York. And thank you for all your feedback, I look forward to speaking to you again.
— Riz Khan