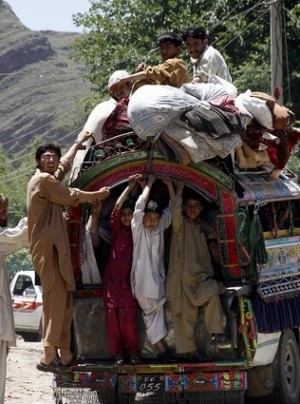 (Photo Credit: Los Angeles Times)
Nicholas Schmidle is a Fellow at the New America Foundation/American Strategy Program.
The Pakistani military is apparently pounding the Taliban in the Swat Valley right now. Since the operation began on May 7 – the day President Asif Ali Zardari was in Washington – the army has released daily reports detailing the number of militants killed. On Friday, they claimed to have taken out 55 Talibs in the previous 24 hours.
That’s a very bad metric of success.
This is not a war to be won with body counts. As Nawaz Sharif, the two-time former prime minister, told me in an email exchange earlier this week, “It’s also a battle of ideas about future visions for the society.” (You can read more of my conversation with Sharif in the latest issue of The New Republic.) So how is the battle for hearts and minds and visions going, you might wonder? Not well.
The United Nations High Commission for Refugees reported on Friday that more than 834,000 internally displaced people (IDPs) have been registered so far. Many of them are confined to camps in areas south of Swat, scrambling for food, shelter and water.
At an event last Tuesday at the New America Foundation (parts one and two), Steve Coll and I discussed the situation in the camps, and I suggested that the Pakistani government – backed by the United States – had a golden opportunity to be visible in the camps, doing everything possible to reassure the refugees that Islamabad’s policies towards the Taliban had changed and that they were serious about protecting the population.
In other words, to restore lost confidence in the state. Because after a few more weeks of bombardment, the Pakistani military will probably retake the city of Mingora, clear the roads of Taliban checkpoints (another misleading measure of success), declare victory, and tell the refugees to return home. And they will, only to find that the army has returned to their bases and that the Taliban haven’t been defeated – but merely taken to the hills.
Imagine my surprise then, when I read last week that 2,000 members of the Falah-i-Insaniat (“Welfare of the People”) Foundation are running around the camps providing services. Falah-i-Insaniat is the new name of Jamaat-ud-Dawa, the front organization for Lashkar-e-Tayyaba. You’ve heard of them, right? They were the ones suspected of being behind the terrorist attacks in Mumbai last November that left almost 200 people dead.
So to re-cap: the government writ collapses in Swat and the Taliban move in; the government attempts to re-establish control in Swat and flushes hundreds of thousands of refugees into camps; due to a lack of planning and capacity, government writ in the camps is tenuous, and banned jihadi organizations pick up the slack.
That’s the bad news.
The good news is that you can read all about Swat, the Taliban, and the paranoia and schizophrenia of the state in my new book, To Live or to Perish Forever: Two Tumultuous Years in Pakistan. The book is a first-hand account of contemporary Pakistan, based on the two years (2006-2008) I spent there as a fellow of the Institute of Current World Affairs.

In January 2008, I was deported as a result of a piece I wrote in the New York Times Magazine called “Next-Gen Taliban.” The story argued that a new generation of militants – headed by firebrands like Maulana Fazlullah in Swat – had escaped control of Pakistan’s intelligence agencies, Islamist parties, and traditional authority structures such as tribes, making the insurgency increasingly unmanageable.
The book describes this split at greater length through the lens of my personal experiences in Swat and throughout Taliban-affected parts of the North West Frontier Province. If you get to the end, you can read about how I went back to Pakistan in August 2008, seven months after being deported, only to this time read news items about my own kidnapping, which I took as a hint to get out.
I’ll be updating my personal website and my Facebook page often; I invite you to follow the book’s progress there. In the meantime, you can watch recent appearances on C-SPAN and listen on NPR here and here.
— Nicholas Schmidle

16 comments on “Guest Post by Nicholas Schmidle: The Good News and Bad News About Pakistan You Haven’t Heard”