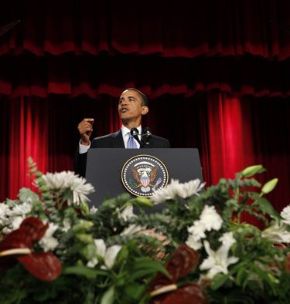 Amjad Atallah co-directs the New America Foundation/Middle East Task Force.
President Obama today delivered an exemplary speech that has the potential to significantly advance America’s national security interests in the Middle East. He spoke, as he has here at home, over the heads of established political leaders and directly to the Muslim world to marshal the vast majority of Muslims to assist US policy goals in Afghanistan and Pakistan by describing them as Muslim policy goals as well.
President Obama spoke to Muslims, convincingly, as a believer – and opened the door to a reshuffling of loyalties. Instead of Muslims against the West, the President implied a strong Judeo-Christian-Islamic heritage allied with humanist principles.
At a minimum he created more political capital for himself and for the United States while buying time for US policy options in the Middle East to be considered.
Although the speech acknowledged past transgressions (colonialism, the US overthrow of the democratic Mosadeq government in Iran in the 1950s, and an implication that the US invasion of Iraq was at least ill-considered if not a violation of international law) it did not apologize for them. He simply noted them matter of factly as a source of our tension with the Muslim world and moved on to discuss what the future might hold, directing a Muslim world that is very alert to past and present grievances toward a problem-solving perspective.
Interestingly, the President’s only mention of a political party was of Hamas. By noting Hamas’ acceptance by part of the Palestinian population, the President was drawing a distinction between those Salafist Islamist forces the US is combating in Afghanistan and Pakistan and those that have political constituencies and accept the legitimacy of electoral processes. Hamas leader Ahmed Yusuf’s first response to the speech was positive, flowery, effusive, and defensive all at the same time.
The President has also done Israel a great favor. No leader – anywhere – has ever presented the Zionist narrative of European oppression as a necessitating factor for a Jewish homeland – to a Muslim audience so directly and with such empathy while linking it directly to the Palestinian narrative of dispossession and oppression under occupation. He firmly linked the right to statehood (self-determination) for both peoples in one sentence.
By contrast, the message from al-Qaeda leader Osama bin Laden yesterday appears self-serving and irrelevant.
— Amjad Atallah

The Limits of Replicating the “Anbar Awakening”
Can Obama Move His Red Line Forward to Strike a Deal with Iran?