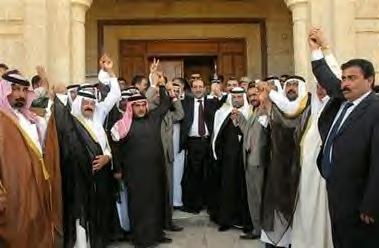 Over the past six months, a number of analysts have attempted to dispense with the facile analogy of the Iraq surge to the Afghan surge and dissuade policymakers from grafting the success of Iraq on to US strategy in Afghanistan. Aside from the contextual differences which Filkins, Olson, McCary, and others have pointed out, there are some fundamental clarifications that need to be made on the Iraq surge, specifically the flipping of the Sunni tribes, known as “the Anbar Awakening.”
For one thing, this needs to understood as a tremendously lucky break that the US capitalized on, not something purposefully induced. As Bing West writes, “Why the Awakening happened in the fall of ’06 has a large element of mystery.” Moreover, the timing and motives of the Anbar Awakening have not been fully understood by most policymakers and analysts. The “flip” began six months before the US surge and had less to do with the conventional explanation of al Qaeda’s radicalism than for reasons of political-economy.
RAND political scientist and recently appointed Assistant Professor in the School of International and Public Affairs at Columbia University, Austin Long, pointed out over a year ago in Survival that it was not al Qaeda’s violence but its encroachment on Anbar tribes’ revenue streams — principally smuggling and highway robbery — that drove a wedge between groups and the success of the tribal strategy:

…Perhaps most importantly, al- Qaeda in Mesopotamia was competing for control of revenue sources – such as banditry and smuggling – that had long been the province of the tribes. Under this interpretation, the tribes did not change sides in response to violence towards civilians or their Anbar kinsmen, as press accounts have suggested. While this violence was not irrelevant, it does not appear to have been the central motive for the shift. For example, some began fighting al- Qaeda in Mesopotamia at least as early as the beginning of 2005, well before most of the violence towards civilians and tribesmen in Anbar occurred. The primary motive was not moral; it was self-interested.
In fact, it can be argued that much (though far from all) of al-Qaeda’s violence against Sunnis in Anbar was intended to coerce the tribes back into alignment with the insurgents. Certainly this was the intent of attacks on selected tribal leaders. In other words, al-Qaeda’s violence was principally an effect of shifts in allegiance rather than a cause. (p. 77-78).

Applying this model to Afghanistan will be difficult as it will rely on the natural divergence of self-interested factions of the Taliban. This seems to place an unreasonable amount of faith in good fortune, particularly since the Taliban are so well entrenched in the South. To model the Anbar Awakening, US forces might simply have to wait for their lucky “break” — that is for self-interested groups to break away from the Taliban’s ideological core — and then partner with unsavory opportunists like Pashtun nationalists or narco-warlords.
Fissures might be induced by altering incentive structures, but at what cost, and what tradeoffs? For instance, would higher buyouts for the opposition create perverse incentives to join it? Moreover, given the history of defecting alliances in Afghanistan, how long will new alliances remain stable? Long enough to build a nation and modern state which has arguably never existed in Afghanistan?
Long goes on to conclude the Anbar Awakening strategy may not last past short-term security gains and may in fact backfire in the medium term. At best it is a stopgap measure, at worst, it sows the seeds for future state failure and civil conflict by creating competing nodes of military power rather than centralizing it. Even if the causes for success were better understood, this hardly seems the model for stabilizing Afghanistan.
— Sameer Lalwani

7 comments on “The Limits of Replicating the “Anbar Awakening””