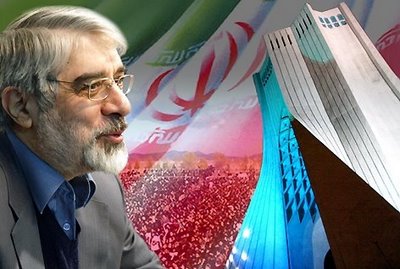 According to my friend and colleague, Afshin Molavi, Mir-Hossein Mousavi’s decision to call for a massive “mourning” day honoring those who have died during the election protests sends a powerful political message to Iran’s citizens linking back to the Iranian Revolution 30 years ago.
As Molavi told me, in Shia culture, martyrs are honored on the third day, the seventh day, and the fortieth day after their death. This 3-7-40 tribute to fallen martyrs killed by the Shah’s forces was in part how the Iranian Revolution of 1978-79 grew.
Mousavi is now deploying symbols and techniques of Iran’s Islamic Revolution to undermine the legitimacy of the institutions of government that have engaged in election fraud.
Today, the green scarves have been replaced by black, the color of mourning, and a former Iranian diplomat in Tehran has just reported to me that those out on the streets supporting Mousavi are now greater today than in any of the other protest marches this past week.
— Steve Clemons

7 comments on “Green to Black: Massive Turnout for Day of Mourning in Tehran”