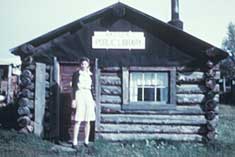 (Wasilla Public Library in 1950s)
I’m about the last in the blogosphere to paste this balanced and sober historiography of Sarah Palin’s life and views — as told by a fellow resident of Wasilla, Alaska.
Anne Kilkenny, who has known Sarah Palin since 1992, is a Democrat — but this treatment of Sarah shows her to be a clear-minded, pragmatic centrist.
If you haven’t yet read this. . .it deserves your attention.

This forward ran in the Anchorage Daily News:

Posted by Alaska_Politics
Posted: September 4, 2008 – 12:11 pm
From David Hulen in Anchorage —
The e-mail below has been bouncing around the Internet since Sunday. It was written by Anne Kilkenny of Wasilla – stay-at-home mom, letter-to-the-editor writer and longtime watcher of Valley politics. She’s a registered Democrat. She was one of the delegates to the Conference of Alaskans in Fairbanks back in 2004. Her bio from the conference is here.
She e-mailed this letter over the weekend to family and friends Outside, and (despite her request not to post it) it went viral on the Internet very quickly, showing up on blogs and Web sites all over. Since then, Kilkenny has been inundated with phone calls and e-mails. She said she stayed up until 3 a.m. last night answering e-mails, and found nearly 400 new ones waiting when she logged on this morning.
It’s posted here with her permission.

And now the internet letter written by Anne Kilkenny from Wasilla, Alaska: