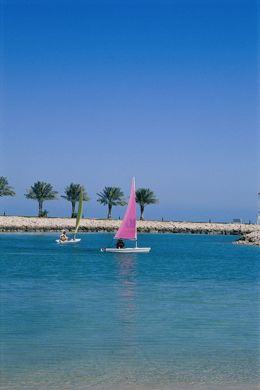 Universities, think tanks, defense contractors, insurgent groups and new media operations all seem to be leaning towards Doha.
Part of George Patton’s own 3rd Army Division is based near Doha. Al Jazeera is headquartered in Doha. Until recently, there was an Israeli trade mission open in Doha and there is even an Israeli Embassy in Doha. On the other side of the coin, the Qatar government, of which Doha is capital, provides funding lifelines both to Hezbollah and Hamas.
Doha and its masters seem to be in every pocket and part of all sides in the Middle East. The small Gulf state is creating leverage points in the Middle East that few other players have been able to generate and is modernizing, liberalizing and creating engagement between the most reformist as well as the most conservative parts of the Islamic world.
Brookings has a Doha Center. So does RAND Corporation. And then there is Cornell, Carnegie Mellon, Texas A&M, Georgetown, and Northwestern.
And even The Washington Note is headed to Doha as its publisher (that would be me) is participating in a major forum organized by UCLA Center for Middle East Development Director Steven Spiegel.
The meeting titled “Enriching The Middle East’s Economic Future III Conference” will keep me busy until Wednesday — but I’ll be weighing in frequently about goings on abroad and reactions to the panel I will be chairing titled “Obama’s America.”
Some of the headliners of the meeting are the Emir of Qatar Sheikh Hamad Bin Khalifa Al-Thani, former French President Jacques Chirac, Finland Prime Minister Matti Vanhanen, Sir David Frost (yes. . .that David Frost), former Congressman Mel Levine, former Omama and John Edwards campaign economic advisor Leo Hindery, former UK Foreign Minister Douglas Hurd, former Obama campain Middle East adviser Daniel Kurtzer, and a whole lot of other interesting folks.
I’ll be weighing in with more when I land. Now I have to run off to the gate!
— Steve Clemons