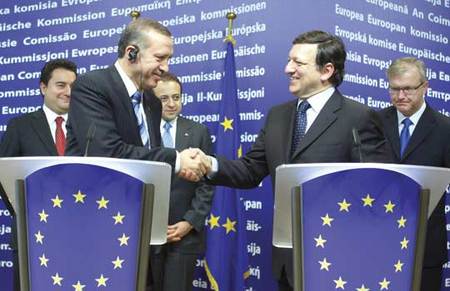 The Economist has a helpful analysis of the troubled accession negotiations between Turkey and the European Union.
One important point made in the article is that Europe requires Turkey to adopt all of the European Union reforms before it is granted membership. Turks are understandably hesitant to make politically difficult and costly reforms without guarantees that enacting those reforms will eventually lead to EU membership. Despite the opening of negotiations in 2005, the French and German governments are currently opposed to Turkey ever joining the EU.
One solution to this problem might be to require certain reforms to be in place before membership, while allowing others to take effect once membership is granted. Certainly, Europe is correct that Turkey must enact reforms related to basic issues of democracy and human rights – such as judiciary reform, constitutional reform, and press freedom – before a membership offer is granted. These principles are at the heart of the the very character of the European Union and it is in both Turkey’s and Europe’s interest that these reforms take place before the carrot of EU membership is awarded.
On the other hand, issues such as opening Turkey’s $60 billion public-procurement market to European firms and allowing free movement of goods and services to and from Europe can wait until Turkey gains membership. These issues are less about principle than about equity among Europe’s member states. It is entirely reasonable for Turkey to lay the legal groundwork for these reforms, but to wait until membership is granted before putting them into practice.
I’ll have more on this after former Finnish president Martti Ahtisaari’s commission publishes its progress report next week.
— Ben Katcher

Guest Note by Dean Baker: Job Situation May Be Improving
Anatol Lieven on Bringing the Taliban Into the Political Process

13 comments on “Which Comes First for Turkey and the EU: Reforms or Membership?”