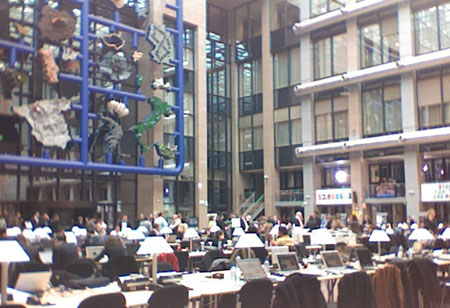 BRUSSELS: While stomping around through Europe on various endeavors, I coincidentally found myself in Belgium today amid an economic summit. I’ve squirreled my way into the working press center — the top floor, too (this thing goes down an additional two stories) — to find roughly as much press attention as the US presidential campaign drew.
Nothing substantial is projected to come out of today’s lunch/ press junket. The story appears to be the human narrative beneath the bleak economic meltdown set stage front. I woke up this morning to this cover story in the IHT, arguing that this meeting — a week after all heads met up in Berlin, and 18 days before they all meet once more in Brussels — is more about Czech insecurity chairing the EU than a sudden shift in economic duress or vision.
Regardless, table furnishings will be privy to an incredible, impassioned, possibly brutal exchange today as an ongoing debate continues, largely pitting east vs. west. Will it fall upon Germany and other titans to bolster and recapitalize banks to the East? Will former bloc states convince further liberalization as Germany holds on to immigrant employment restrictions set on nations entering the union in 04 and 07? Will Finland and Sweden be left out to dry, having invested heavily in the Baltics and now suffering as a result? What of the auto world; Saab appears to be dead, despite Swedish efforts to assist the GM brand, so long as jobs remain in Sweden, and Sarkozy has made it clear — to the anger of some states — that a French bailout of its car makers would expect that production not be further shifted out of state.
If anything breaking occurs, I certainly won’t be the first to print — my French is struggling — but I will dutifully file as quickly as possible on the heals of Reuters.
— Brian Till

A Miscellenous Sunday
Changing the Course in Afghanistan and Pakistan