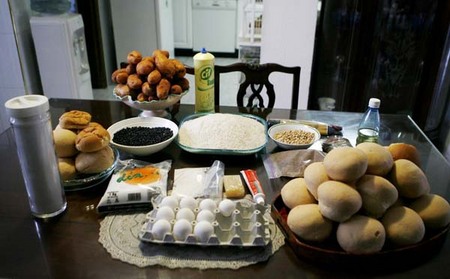 The monthly food ration for a Cuban adult. Photo credit Javier Galeano/AP.
Patrick Doherty directs the New America Foundation/U.S.-Cuba 21st Century Policy Initiative.
One of the most hopeful signs that both the U.S. policy of regime change and the Cuban policy of total resistance is melting was the joint military exercise at the Northeast gate of Guantanamo earlier this month. It is just really hard to maintain that the other side is all that bad if our armed forces are training to save each others’ lives rather than kill each other.
Imagine that happening in North Korea or Iran.
So it stands to reason that if regime change is no longer our policy and that it is being replaced by a more pragmatic policy of engagement over mutual interests, the codified conditionality embedded in the Helms-Burton legislation that requires Cuba to become a Jeffersonian democracy before we change our policy — contradicts what is essentially our de facto policy (not to mention being anachronistic).
In its place, I would argue that a pragmatic policy of engagement over shared interests should focus on the economy of Cuba, for that is where the vast majority of the suffering of the Cuban people has its root. Indeed, recent reports say that across Cuba over 50 percent of infants are suffering from anemia caused by malnutrition brought on by poor agricultural productivity, high international food prices and last year’s devastating hurricane season.
That the old way of running the Cuban economy is unacceptable also happens to be something that Washington and Havana can agree on. This article by Marc Frank of Reuters, entitled, “Cuba Ponders Reduced State Role In Economy” tells the story of how agricultural deficits have forced the Cuban government to shift farm production into the hands of farmers, and in the process, rethink the role of property in the Cuban system.
That sounds like significant progress to me, progress that Washington should be taking as a sign of the kinds of change we can embrace…and believe in.
— Patrick Doherty