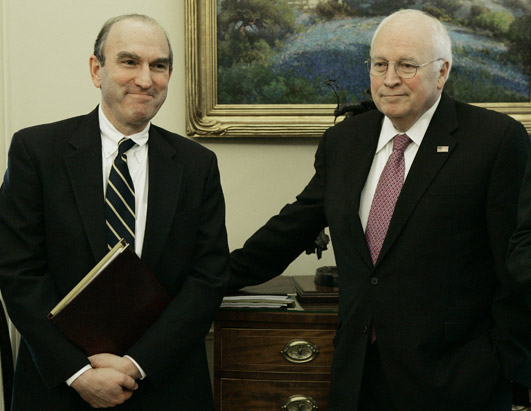 Jim Lobe has just confirmed that outgoing Special Assistant to President George W. Bush and Senior Director for Near East and North African Affairs and Deputy National Security Adviser for Global Democracy Strategy Elliott Abrams will be joining the Council on Foreign Relations team in February.
Richard Haass, President of the Council on Foreign Relations, reportedly considered and declined a possible role as one of several Obama administration envoys to the Middle East.
Now, it is vital to keep Haass exactly where he is — because the only thing worse than hearing that Elliott Abrams will be joining Max Boot and some others on the CFR payroll is learning that he might have become President of the organization as well.
We look forward to some good, principled foreign policy debates with Ambassador Abrams after he lands.
To Abrams’ credit, I hear that he throws a great Passover seder and does invite others with whom he doesn’t necessarily agree on Middle East issues and national security policy overall. I think that this kind of reaching out is important — and credit where credit is due.
— Steve Clemons

30 comments on “Elliott Abrams to Council on Foreign Relations”