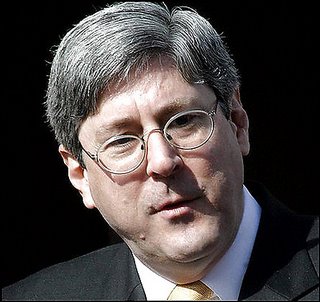 Yesterday, former Defense Department Under Secretary Douglas Feith failed to show up at a Congressional hearing investigating abusive interrogation techniques used on combat detainees because he did not want to appear along side former State Department Chief of Staff Lawrence Wilkerson.
I happen to know that Wilkerson would have conducted himself as a courteous professional with a profoundly different view from Feith — but it is true that Wilkerson has offered some colorful comments in the past about the pro-torture pro-harsh interrogation techniques Defense Under Secretary and close pal of Ahmad Chalabi. These were made at a session I hosted at the New America Foundation and which were featured on Jon Stewart’s The Daily Show:

But for the public’s benefit and the record, here is an html copy of Wilkerson’s prepared testimony.
I have made a quick roster of the occasions Wilkerson mentions Douglas Feith in his prepared comments:

1. After the tragic events of September 11, 2001, Secretary Rumsfeld and certain of his subordinates wanted the war that was coming to be a broad, global one, not just against al-Qa’ida. Read Mr. Feith‘s book, War and Decision, and he will tell you in that book how seriously he and Mr. Rumsfeld wanted to broaden the war. He will also tell you that he and Mr. Rumsfeld believed the fight was not simply against al-Qa’ida but against every terrorist who might raise his head, from the criminal thugs in the Philippines called Abu Sayyaf, to the al Qa’ida derivatives in Southeast Asia known as Jemaah Islamiyah. From the tone in the book, one gets the impression that Mr. Feith would have dearly loved to throw Hamas and Hezbollah into the mix as well.
2. [Rumsfeld] also set up a sort of intelligence “red team” in the office of his Undersecretary for Policy, Mr. Feith. This team vetted the intelligence community’s raw materials, analysis and findings.
3. These were the lawyers who set the legal background against which other-than-standard interrogation methods would be explained away as “in accord with the Geneva Conventions”, “not constituting torture”, “fully within the Article II powers of the Commander-in Chief”, and so forth. At Defense, Jim Haynes and Douglas Feith would adapt these views to their needs at the Pentagon. Indeed, in the recent book Torture Team by English barrister Philippe Sands, in extended interviews Mr. Feith appears to express no small degree of pride in having helped make the Geneva Conventions adaptable to the needs of the new interrogation regime. In my view, this was done largely through artifice not unlike the angels sitting on the pinhead. Such artifice may appeal to certain lawyers but I assure you soldiers have no use for it for they know how dangerous such arguments are when put to the hard act of execution in the field.
4. Meanwhile, the operational end of this affair was orchestrated by the Secretary of Defense and his subordinates, Haynes, Feith, Stephen Cambone and I’m quite certain others. Certain of these individuals, including Addington, even visited the prison at Guantanamo Bay in September 2002 to get a better grip on what was happening to acquire actionable intelligence and to inform their own views about what was possible.

I think Wilkerson’s comments about Feith were fair, honest, and seem consistent with the facts as they have been presented by many in this debate on all sides of the aisle. If Feith didn’t like what Wilkerson said about him outside of the hearing room, one must wonder how thin Feith’s skin is — and Feith should revisit the many unkind comments he has made about his ideological rivals inside the Bush administration. And besides, Wilkerson’s comments about Feith were really quotes of what General Tommy Franks had said about Feith. Wilkerson just offered a bit of a twang and flourish to Franks’ assessment.
This brings me to an interesting and potentially disconcerting auction of lunches with foreign policy personalities being orchestrated by Young Professionals in Foreign Policy — disconcerting only in that I fear that I will not see the luncheon with me bid on by anybody as all of the other possibilities are provocative and interesting.
Folks will be bidding on “lunch dates” with the following crowd:

Someone please bid a couple of bucks on me — just so that I can maintain some dignity next time I’m paired on a show with AEI’s Danielle Pletka or even Paul Wolfowitz, who I know will get some bids.
But to spice up the lunch possibility with Douglas Feith and to appeal to the possibility of higher principles in Feith and Lawrence Wilkerson for this charity-directed fundraiser, YPFP should ask Wilkerson and Feith to double date. That would be interesting — and also let a Daily Show camera in on the fun.
— Steve Clemons

30 comments on “Douglas Feith a No Show”