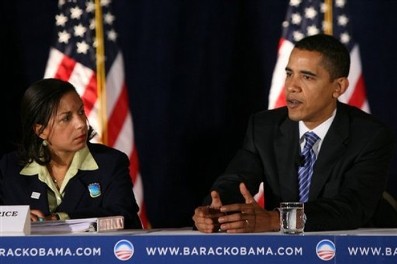 (Pictured Above: Dr. Susan Rice with Barack Obama)
On a conference call this morning, Dr. Susan Rice, Rep. Adam Smith (D-WA), and Greg Craig (whose client’s have included Russian dissident writer Alexander Solzhenitsyn, Former UN Secretary General Kofi Annan, and Elian Gonzalez’s father, Mr. Juan Miguel) defended Barack Obama against recent criticisms from Sen. McCain and other prominent Republicans about Obama’s approach to counterterrorism.
The Obama camp went to great lengths to show the nuances of Obama’s counterterrorism plan. I was particularly impressed with Dr. Rice’s argument that in addition to being strong militarily, Obama’s plan will “dry up support for extremists” in part by upholding at home the values we preach abroad, even with respect to terrorists and extremists. This claim requires more explanation as the campaign continues, but is a promising start. I have also not heard any mention of reducing terrorist support as a means of fighting terrorism from the Republican side, and it is an often overlooked but important factor in reducing the effectiveness of terrorist groups.
The real zinger of the call also came from Dr. Rice, criticizing former New York City Mayor Rudy Giuliani. In response to Giuliani’s criticism of the Supreme Court decision allowing Guantanamo Bay detainees to petition for the right of habeas corpus, Rice read a quote from a 1994 New York times article about the trial of the bombers in the first World Trade Center attacks. Giuliani said that trying the bombers, “demonstrates that New Yorkers won’t meet violence with violence, but with a far greater weapon–the law.” Rice then said that Giuliani thus, “was for the law before he was against it.”
Look for more attempts to show McCain and his surrogates as “flip-floppers” on important issues as the Presidential campaign wears on. But for now I was very pleased to hear Obama’s more complex, but also more pragmatic and reasoned approach to fighting terrorism.
— Andrew Lebovich