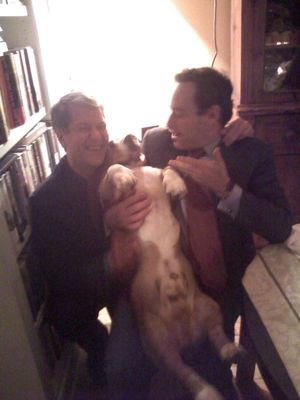 For those of you who can’t laugh now and then, move on. I’ll be serious again soon. Promise.
The pic above is one of David Frum, myself, and a very pleasant pup named Benson — who claims to own journalist Martin Walker and spouse Julia Watson (publisher of the blog eat Washington)
David and I have both had our turns at each other. After all, he did have much to do with coining the term “axis of evil” for use by our still incumbent President — and I don’t remember the exact phraseology he used but think he referred to me once on his prominent blog as “lunkheaded.” I know some of you agree with him.
But beyond all the public hype and foreign policy drama that surrounds some of the more notable personalities, Frum, his wife, and others and I had a fantastic dinner and discussion just before the presidential election. Frum was pro-McCain and anti-Palin but steadfast in his decision to vote Republican. Danielle Crittenden, Frum’s spouse, was not high on McCain and definitely not high on Palin, and shared that she was tilting Obama’s way.
I admitted that I hoped that Chuck Hagel was somehow going to parachute in at the last minute (fantasy) — but that I had to tilt Obama’s way.
Benson the Amazing Basset Hound was key to the evening’s success and softened Frum enough to see at least some things my way. And then, Danielle Crittenden did write this wonderful piece about Sarah Palin that I think was classic.
I’m sharing this because I can’t keep secret any longer the fact that I had a great time with David Frum, Danielle, and the rest — and am going to be doing so again tonight.
I regret that David may get roughed up more by Bill Kristol and some of his friends at AEI for this disclosure than I will by my readers (particularly POA). . .or so I hope.
And lest you ask, dinner conversations are always off the record.
More soon.
— Steve Clemons