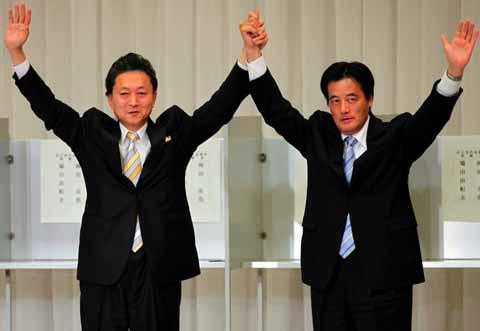 The Democratic Party of Japan has scored a historic and monumental victory over the many decades ruling Liberal Democratic Party in Japan.
The DPJ has scored 308 seats in Japan’s powerful lower house while the LDP has retained only 119 seats. With various anti-conservative party allies, the DPJ should be able to control about 340 seats in the Lower House — 20 more than are needed to prevent the LDP from causing legislative mischief and roadblocks.
Japan now has a genuine two party structure — and the Japanese government that will soon take form succeeding the Taro Aso government — will be the first manifestation in many years that a post-WWII lobotomized Japan has now healed itself and is moving forward.
Japan will now learn to be itself, to pursue its own interests in a more healthy manner than in the past. The United States will remain Japan’s key ally — but less key than before. Japan will support America globally but not in all matters.
Japan will now become something new — and its democracy today is far more real than what it has had in decades.
More soon on the elections, but Tobias Harris is one of the best to check in on.
— Steve Clemons