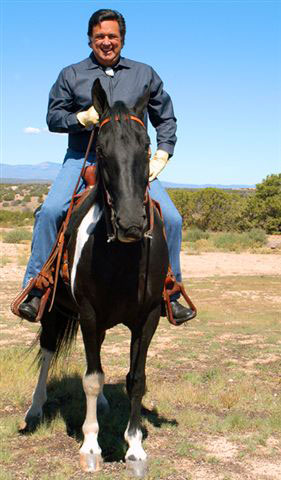 Anyone who knows New Mexico Governor Bill Richardson knows he can be a handful, can be complicated, and can too often want the story about him more than others. Those are characteristics of most who aspire to the presidency.
However, this week during his trip to Cuba allegedly for agricultural trade promotion reasons, Governor Richardson demonstrated why he is such a vital national asset in America’s diplomatic game.
Richardson has a knack for dealing with the harder challenges in international affairs — often extracting American captives from totalitarian regimes but also understanding that in some cases what the game is about is not getting some journalist or innocent released from a gulag but rather using that engagement to create “possibilities” in America’s engagement with that nation that did not exist before.
My devout Republican friend Phil Peters writes at his blog, The Cuban Triangle, about RIchardson’s recent diplomatic foray to Havana very positively.
Peters reports (and here is a good CBS News clip of some of this in Richardson’s press conference):

1. Governor Richardson concludes his visit by saying he will report to President Obama and by offering to set up a dialogue between the Cuban government and Cuban Americans.
2. Richardson urges Cuba to act, “especially in the humanitarian area,” and wants both Washington and Havana to ease travel restrictions. “Normalizing relations is going to take time, it is a complicated thing and there are a lot of issues to address…It will take time, but we have to do it,” he said.
3. Richardson said that the United States has suggested that the two governments drop restrictions on their diplomats’ movements, and he urged Cuban officials to agree to the idea.

The plan would defer larger and more contentious issues and start with the two sides taking humanitarian steps.
The United States would put into effect the announced Obama policy ending restrictions on family travel and remittances; allow greater sports, cultural, scientific, academic, and business exchanges; and allow Americans in general to travel to the island.
Cuba would end “bureaucratic restrictions and high fees” that make family visits more costly, accept a U.S. proposal to end the restrictions that limit both sides’ diplomats to the Havana and Washington capital areas, and start an “informal dialogue” with Cuban Americans.

Regarding his own role:

Richardson also said that he sees no need for a U.S. special envoy and doesn’t think he will have a role in U.S. diplomacy toward Cuba.

A couple of quick reactions from TWN‘s corner.
First of all, Bill Richardson is the right guy to upend the institutional inertia at the Department of State and the House Foreign Affairs Committee in charting a new, more constructive course in US-Cuba relations. He gets this issue better than any other major player in US politics and made this clear as well during the presidential debates and his campaign for the White House.
His modest statement that America did not need a “special envoy” — and did not need him — for this challenge is incorrect.
Secretary of State Hillary Clinton “promised” Senate Foreign Relations Committee Ranking Member Richard Lugar a “full policy review” during detailed responses to written questions (pdf) posed by Lugar to the then nominee Clinton.
Nothing at all of consequence has happened with this review. There is no broad re-assessment of opportunities and challenges in the US-Cuba relationship, nor a new assessment of what was achieved or not regionally and internationally from Obama’s recent Summit of the Americas outreach to Cuba and his efforts to lighten travel and remittance restrictions for Cuban-Americans.
At this point, Secretary of State Clinton has a State Department that is in “non-compliance” with the oversight committee of the US Senate that measures and observes the administration’s actions because of the failure to perform this promised “policy review” — behind which Clinton hid when not responding to a number of important questions.
That is why Bill Richardson is needed.
There are many decades of institutionalized neglect and built in inertia in the US-Cuba relationship that prevent the State Department from not only “seeing what is possible” in a restructured relationship — but in deploying a strategy that moves us squarely and definitively in a new direction.
Travel for Cuban-Americans is not enough. That is a discriminatory executive order that creates a class of action and opportunities for one class of ethnic Americans and denies equal treatment for other Americans. Obama should know better.
But despite Richardson’s own references to Cuban-Americans in his commentary in Cuba, he has frequently endorsed the removal of travel restrictions for all Americans. That is the policy that an American democratic government should embrace.

As Republican Congressman Jeff Flake (R-AZ-6) said on one occasion at the New America Foundation:

Barack Obama should take a step back from the US-Cuba question and realize that changing US-Cuba relations much more than he has remains the lowest hanging fruit among foreign policy possibilities for him. US-Cuba relations has always mattered far beyond the relationship itself and had important “echo” impacts on broader world affairs.
It’s time that Obama realized that this one is easier than it looks. People to people exchange. Travel. Scientific, cultural and educational exchange. All of these are the pathway to taking the US-Cuba relationship in a new and healthy direction.
Drop the counterproductive, compulsive obsessiveness with “conditionality.” It does not work and undermines American interests.
Those who wanted conditionality have achieved nothing the last five decades except freezing the relationship in a Cold War status quo that must be shattered.
And the best way to shatter it is to incrementally pull out the foundations of the “theory of the embargo” and to rebuild some degree of trust between regimes that may not learn to like each other for a long time — but who nonetheless could demonstrate a practical kind of engagement that few thought possible even a few years ago.
Obama should ask Bill Richardson to be his envoy, sherpa and nudge to drive US-Cuba relations beyond the anachronistic Cold War trap they have been in towards new terms of engagement fit for the 21st century and Obama’s eventual foreign policy legacy.
— Steve Clemons publishes the popular political blog, The Washington Note
Extra reading: For those interested, my colleague Patrick Doherty’s work on a set of humanitarian protocols tied to hurricane diplomacy with former State Department Chief of Staff Lawrence Wilkerson is gaining some real traction.