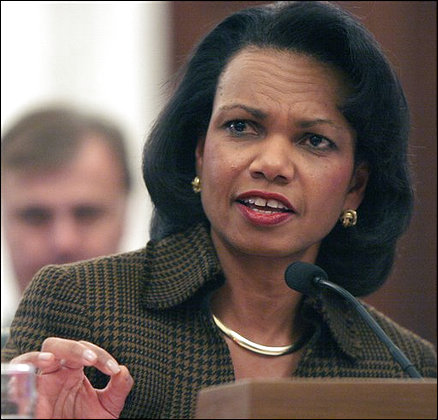 No matter what one may think of Condoleezza Rice’s diplomatic record — which I think is better than many liberal critics gauge — the fact that Israel Prime Minister Ehud Olmert gave her a kick in the teeth as she departs her office is obnoxious and harmful all around.
Olmert also seemed to convey that he had George W. Bush on a little puppet string — that he could pull the United States President out of a meeting and compel Bush to veto the course that Secretary Rice was going and had been empowered to do by that same President. True or not, Olmert crossed a real line in his statement.
This kind of arrogance from Israel’s leadership only erodes enthusiasm for Israel’s posture in the Middle East.
Perhaps Israel’s so-called defensive efforts that have killed nearly 1,000 people — and many innocents among them — and this high-ended, stridently unfriendly treatment of Condoleezza Rice will help to decrease the emotional enthusiasm for Israel’s Gaza raids.
It is certainly sending a signal to many in the incoming Obama administration that while there are convergent American and Israeli interests — friendship and trust are eroding whether one wants to admit publicly or not.
Shaming a US President and Secretary of State may not change the course in policy and may not shift America’s general approach to the region, at least for the time being, but it does take the fizz out of the unique relationship.
From an AFP story today:

US Secretary of State Condoleezza Rice was left shame-faced after President George W. Bush ordered her to abstain in a key UN vote on the Gaza war, Israeli Prime Minister Ehud Olmert said on Monday.
“She was left shamed. A resolution that she prepared and arranged, and in the end she did not vote in favour,” Olmert said in a speech in the southern town of Ashkelon.
The UN Security Council passed a resolution last Thursday calling for an immediate ceasefire in the three-week-old conflict in the Gaza Strip and an Israeli withdrawal from Gaza where hundreds have been killed.
Fourteen of the council’s 15 members voted in favour of the resolution, which was later rejected by both Israel and Hamas.
The United States, Israel’s main ally, had initially been expected to vote in line with the other 14 but Rice later became the sole abstention.
“In the night between Thursday and Friday, when the secretary of state wanted to lead the vote on a ceasefire at the Security Council, we did not want her to vote in favour,” Olmert said.

Condoleezza Rice has worked hard on the Israel-Palestine peace process — and her efforts failed. But I had the privilege of sitting in with her in a meeting that she held in her office with former Israel Foreign Minister Shlomo Ben-Ami and was impressed by her retention of and facility with the details of the Arab-Israel morass.
She was optimistic when we met — and very committed to what she thought was a sensible track that would offer a “mature” course of action for all of the parties involved.
Olmert is the one who should be shame-faced.
Lots of people want to take pot shots at the outgoing foreign policy and national security team — but in this case — it is Israel’s leadership that has misbehaved and overshot. . .again.
The appropriate thing for Condoleezza Rice to do right now is return the favor to Olmert by actually working in her final days on the job to implement immediately that UN Cease Fire Resolution.
And maybe George W. Bush can pull Olmert out of a speech to let him know what’s going down.
— Steve Clemons

Ways of War
Those Who Saw the Crash Coming. . .

235 comments on “Defending Condi: Olmert Shames Himself in Kick-in-the-Teeth Attack on Rice”