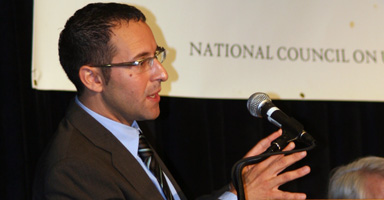 This is a guest post by New America Foundation Middle East Task Force Co-Director Daniel Levy
For many people, what has happened today between Gaza and Israel may have all too familiar a ring to it – Israel warns and then retaliates to an alleged or real Palestinian escalation of violence, there is Arab condemnation and international exasperation, eventually things de-escalate but according to Israel’s timetable as the U.S. prevents effective early international mediation, and we’re back to where we started – with the addition of more blood and death (many innocent, some less so), more wounded and more shattered families.
Most of those involved, often including Israel, tend to regret things not coming to a halt sooner. The Israel Defense Forces with their modern weaponry try to pinpoint targets but invariably, predictably, and painfully there are plenty of “misses”; the Palestinians – well their weaponry is by definition more crude, they use what is available and the results are correspondingly messy and indiscriminate. Bottom line – Arabs and Jews are killing each other – so what’s new?
And why on earth would America want to be involved?
Here’s the bad news folks – America is involved, up to its eyeballs actually. Today, after Israeli air-strikes that killed over 200 Palestinians in Gaza, the Middle East is again seething with rage.
Recruiters to the most radical of causes are again cashing in. If Osama Bin Laden is indeed a cave-dweller these days then U.S. intel should be listening out for a booming echo of laughter. Demonstrations across the Arab world and contributors to the ever-proliferating Arabic language news media and blogosphere hold the U.S., and not just Israel, responsible for what happened today (and that is a position taken, for good reasons, by sensible folk, not hard-liners).
America’s allies in the region are again running for cover. America’s standing, its interests and security are all deeply affected. The U.S.-Israel relationship per se is not to blame (that is something I support), the unresolved Israeli-Palestinian conflict is – and thankfully we can do something about that.
Why did today’s events occur?
The list of causes is a long one and of course depends who you are asking. Here are five of the most salient factors as I see them:

(1) Never forget the basics – the core issue is still an unresolved conflict about ending an occupation and establishing an independent Palestinian state – everything has to start from here to be serious (this is true also for Hamas who continue to heavily hint that they will accept the 1967 borders).
(2) The immediate backdrop begins with the Israeli disengagement from Gaza of summer 2005, ostensibly a good move, except one that left more issues open than it resolved. It was a unilateral initiative, so there was no coordinating the ‘what happens next’ with the Palestinians. Gaza was closed off to the world, the West Bank remained under occupation and what had the potential to be a constructive move towards peace became a source of new tensions – something many of us pointed out at the time (supporting withdrawal from Gaza, opposing how it was done).
(3) U.S., Israeli and international policy towards Hamas has greatly exacerbated the situation. Hamas participated in and won democratic elections to the Palestinian Legislative Council in January 2006. Rather than test the Hamas capacity to govern responsibly and nurture Hamas further into the political arena and away from armed struggle, the U.S.-led international response was to hermetically seal-off Hamas, besiege Gaza, work to undemocratically overthrow the Hamas government and thereby allow Hamas to credibly claim that a hypocritical standard was being applied to the American democracy agenda.
American, Israeli and Quartet policy towards Hamas has been a litany of largely unforced errors and missed opportunities. Hamas poses a serious policy challenge and direct early U.S. or Israeli engagement let alone financial support was certainly not the way forward, but in testing Hamas, a division of labor within the Quartet would have made sense (European and U.N. engagement, for instance, should have been encouraged, not the opposite).
Every wrong turn was taken – Hamas were seen through the GWOT prism not as a liberation struggle, when the Saudi’s delivered a Palestinian National Unity Government in March 2007 the U.S. worked to unravel it, Palestinian reconciliation is still vetoed which encourages the least credible trends within Fatah, and unbelievably Egypt is given an exclusive mediation role with Hamas (Egypt naturally sees the Hamas issue first through its own domestic prism of concern at the growth of the Muslim Brothers, progress is often held hostage to ongoing Hamas-Egypt squabbles).
(4) Failure to build on the ceasefire. Israel is of course duty bound to defend and protect its citizens, so as the intensity of rocket fire in 2007-8 increased, Israel stepped up its actions against Gaza. But there was never much Israeli military or government enthusiasm for a full-scale conflict or ground invasion and eventually a practical working solution was found when both sides agreed to a six-month ceasefire on June 19th 2008. Neither side loved it. Both drew just enough benefit to keep going. That equation though was always delicately balanced.
For the communities of southern Israel which bore the brunt of the rocket attacks, notably Sderot, the ceasefire led to a dramatic improvement in daily life, and there were no Israeli fatalities during the entire period (only today, following the IDF strikes did a rocket hit the town of Netivot and kill one Israeli). Israel was though concerned about a Hamas arms build up and the entrenching of Hamas rule (which its policies have actually encouraged). For Gaza the calm meant less of an ongoing military threat but supplies of basic necessities into Gaza were kept to a minimum – just above starvation and humanitarian crisis levels – an ongoing provocation to Hamas and collective punishment for Gazans. The ceasefire needed to be solidified, nurtured, taken to the next level. None of this was done – the Quartet was busy with the deeply flawed Annapolis effort.
(5) A disaster was waiting to happen, and no-one was doing much about it. There was of course a date for the end of the ceasefire – December 19th. As that date approached both sides sought to improve their relative positions, to test some new rules of the game. Israel conducted a military operation on November 4th (yes, you had other things on your mind that day), apparently to destroy a tunnel from which an attack on Israel could be launched, Hamas responded with rocket-fire on southern Israeli towns.
That initiated a period of intense Israeli-Hamas dialogue, albeit an untraditional one, largely conducted via mutual military jabs, occasional public messaging and back-channels. Again though the main reliance was on Egypt – by now in an intense struggle of its own with Hamas. When Hamas pushed the envelop with over 60 rockets on a single day (December 24th), albeit causing no serious injuries and mostly landing in open fields (probably by design), Israel decided that it was time for an escalation. That happened today – on a massive scale – with an unprecedented death toll.

67 comments on “Daniel Levy: What Next on Israel/Gaza? Why Should Americans Care?”