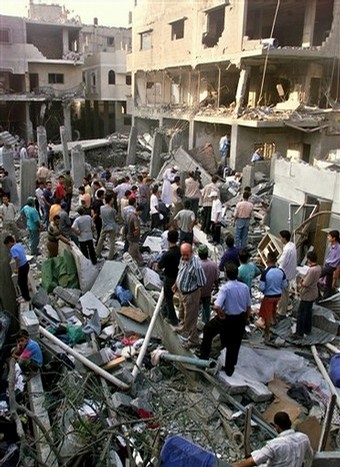 One of the most important and sensible comments made during the last stretch of the campaign came from the straight-talking Joe Biden. The then Democratic vice-presidential nominee said that Barack Obama would be “tested” by crisis early in his presidency.
Biden was right — and if anything, probably understated the frequency and severity of these tests of America’s resolve and objectives in the world. To be fair, I believe that a McCain administration would have been tested equally.
Part of what is going on today with Israel Defense Minister Ehud Barak’s unleashing of massive Israeli airpower against Hamas offices in Gaza is a test of Obama’s America. Hamas’s decision to end its “lull”, or temporary ceasefire with Israel, also has a lot to do with testing the U.S. and seeing what the outlines of Obama’s policy will be.
Barack Obama cannot afford to allow his presidency and its foreign policy course to be hijacked by either side in this increasingly blurry dispute. Israel’s actions today just created thousands of aggrieved and vengeful relatives committed to delivering some blowback against Israel.
Hamas, at the same time, overplayed its hand at a fragile time. Hamas will never play the role of supplicant or subordinate to Israel’s interests — but its resumption of violence before the Israeli elections and during a time of transition in US politics triggered a devastating responce from Israel that signficantly undermined its own interests as a potentially responsible steward of a Palestinian state.
The violence we are watching is just yet another installment in the blur of tit-for-tat violence from both sides of this chronic foreign affairs ulcer.
The US — and the incoming Obama administration — must move an agenda forward in Israel-Palestine negotiations that works at levels higher than the perpetrators of this violence. It’s time to get this conflict out of the weeds, and time to stop allowing any actors in this drama to hijack the foreign policy machinery of governments trying to push forward a Palestinian state.
America has to get out of the role of “managing” this conflict — and must solve it. Israel and the Palestinians have shown themselves unable to maturely end their conflict — and short of a results-oriented strategy that puts the “Middle East Peace Business” out of business, America will be constantly tugged into this conflict and blamed for it.
My colleague Daniel Levy who co-directs the Middle East Task Force of the New America Foundation will be weighing in later with his own thoughts from Israel later today or tomorrow.
But for now, the Obama administration must set its sites higher than this tragic episode and sculpt a national security strategy that this minority view, or that minority view, armed with guns and rockets and planes and bombs can’t hijack and derail at will.
It’s time for a new course — to get beyond false choices between Israel’s interests and Palestinian interests — and to generate a new equilibrium that can withstand these predictable pin-pricking provocations.
— Steve Clemons

Daniel Levy: What Next on Israel/Gaza? Why Should Americans Care?
J Street Statement on Gaza Attack