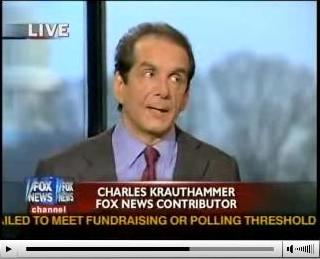 The concert of democracies idea has been bandied about for quite a while in both liberal internationalist and neoconservative circles. (There is perhaps a reason for that as Professor Tony Smith has argued). But recently it’s been taken up by Sen. John McCain.
Some of his supporters of his like Charles Krauthammer are excited by this idea because they believe it’s the very Trojan horse they have been seeking to undermine the United Nations system, and with it the fanciful notions of internationalism. Somehow I missed this video ThinkProgress posted last month. Krauthammer states:

Well, I like the idea of the league of democracies, and only in part because I and others had proposed it about six years ago. What I like about it, it’s got a hidden agenda. It looks as if it’s all about listening and joining with allies, all the kind of stuff you’d hear a John Kerry say, except that the idea here, which McCain can’t say, but I can, is to essentially kill the U.N.

Krauthammer’s strike against the UN (in the guise of a purportedly liberal internationalist proposal) is worrisome for its cynical intentions and actual anti-internationalist sentiment — especially at a time when a host of writers, pollsters, and strategists argue that greater internationalism will not only be critical to the US image, but will be the currency of US power and influence.
Additionally, Michael Lind has pointed out that the concert of democracies proposal is equally troubling for its assault on the principles of sovereignty, a critical stabilizing organizing principle in the post-WWII international security order. That’s why, despite the best intentions, it easily falls prey to the pugnacious nationalist and neoconservative agenda that continues to harbor unrealistic ambitions of American primacy.

No doubt a consensus is solidifying that the UN Security Council’s formal structures are out of touch with the new geopolitical realities and thus something must be mended or created to bridge this gap. But instead of a concert of democracies, Lind has proposed a flexible, informal Great Global Power Council modeled on the G8 as well as regional concerts of power to manage respective security demands.
While recognizing the UN model is antiquated, rather than kill it, this move seeks to supplement it and bolster a reinvigorated internationalist regime. Decoupling great power security decisions from the UN might prove a useful, complementary multi-lateralist model.
The UN general assembly and security council, serve invaluable functions but are not necessarily suited for rapid decision making on issues of global security. The demands of global geopolitics will not be best served by another international government camp where everyone gets to play and have a role. Instead we need a more effective and efficient decision making process that is populated by the real global power brokers of the 21st century, not 1945.
–Sameer Lalwani

Daily Show on GAO Critique of Bush Anti-Terror War: “We Could Have Gotten Here By Doing Nothing.”
The Syria Nukes Narrative

7 comments on “Concert of Democracies as a Shell Game?”